I released this to active members of Nick's Notebook last week. It's an open private placement in the most advanced pure play vanadium project in North America. If you'd like to participate, full details are below. This deal closes tomorrow.

First it was lithium.

It is now vanadium’s turn.

We had multiple wins with lithium (Lithium X — 1,480%, Millennial Lithium — 112%). Our cobalt play — First Cobalt — just started trading again after announcing multiple acquisitions and consolidating a major cobalt district. We’re up 20% on that with much more ahead.

Now we have a vanadium play. It comes from the same group that brought us Lithium X and First Cobalt.

The deal has an extremely tight structure with only 5.4 million shares out pre-financing. More on the company in a second. First, a vanadium lesson.

A Bloomberg article that ran August 23 declared: It’s Party Time for the Metals No One Knows About. It began:

It’s turning out to be a great year for minor metals.

Rechargeable-battery ingredient cobalt has gained 83 percent, while ruthenium, used in the chemical industry and electronics, is up 63 percent. The latest star is vanadium, an obscure silvery-grey metal thought to have been used to harden steel as far back as the Crusades. 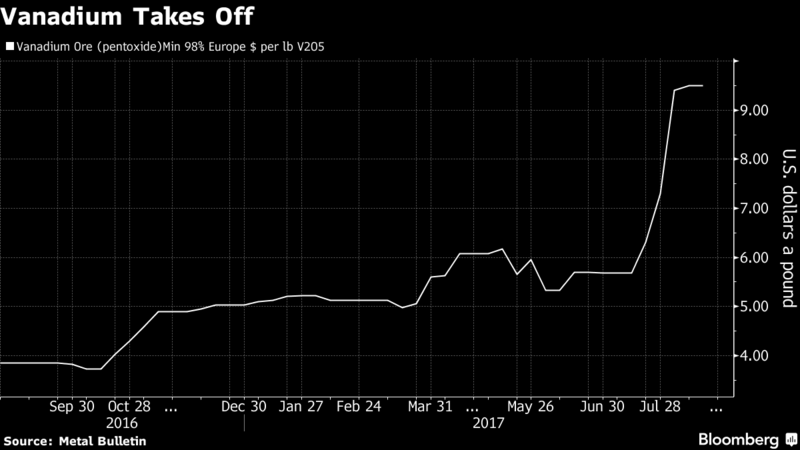 The short-term driver is a proposal in China to increase the amount of vanadium required in construction steel. News is expected on that next month.

Right now, ~90% of vanadium is used in steel construction. But it is only used in 9% of all the world's steel. Demand from steel is expected to grow as more countries incorporate vanadium steel into their infrastructure plans.

A new source of growth is expected from the battery market.

Like with lithium and cobalt, it is expected that demand for vanadium from the rechargeable battery market will soon explode. Some mainstream firms, like Pala Investments, forecast demand will grow 10-fold from 2015-2025.

It’s the main ingredient in vanadium redox flow batteries. They aren’t used in cars. Instead, these are batteries meant to store large amounts of electricity produced by intermittent sources like wind and solar. We don’t need to cover the ascent of renewable energy… it’s happening.

Vanadium redox batteries allow companies to sell solar power at night and wind power when it’s calm. They are non-flammable, environmentally friendly, have 10,000-cycle lifetimes, and retain 90% of their capacity over 20 years. 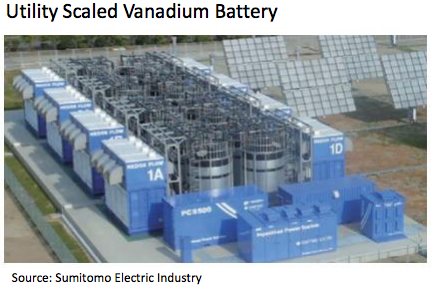 The cost of vanadium relative to lithium batteries is higher, at $300-$500 per kilowatt-hour versus ~$200 per kWh. But those costs have been halved in the past three years and are set to come down further.

In the past few years hundreds of millions of dollars have been raised in early-round funding for vanadium battery companies. UniEnergy raised $25 million. Imergy Power Systems raised over $100 million. Vionx Energy, which has ties to United Technologies and Siemens, raised $58 million.

And with vanadium accounting for 30%-50% of the cost of a vanadium redox battery, it is essential that these up-and-coming battery manufacturers secure their supply.

Vanadium supply is an issue, which is why prices are rising. There are no vanadium stockpiles. Vanadium is mined in two types of mineral deposits: carbon-rich shales and magnetite (iron oxide) alongside titanium.

Russia, China, and South Africa are the largest sources. Russia is on the naughty list and we’re essentially in a proxy war with China over North Korea.

That leaves the U.S. 96% reliant on foreign sources for its vanadium. There are no operating primary vanadium mines in North America.

We are investing, via private placement, in the company with the most advanced pure play vanadium project in North America. But we're only taking new investors up through midnight today. You can review more of my research by clicking here, but you must get in today.

Full details on Nick's Notebook, private placements, and how to participate are located here. Alternatively, you can call our VIP support desk at (844) 539-7664 for more information.