Fate Knocking at the Door

Beethoven’s Symphony No. 5 is one of the most recognizable pieces of classical music.

You know the tune...

As the tune was written between 1804 and 1808, Beethoven’s hearing had already started to deteriorate.

Living in Vienna and searching for a remedy to his ailment, the composer wrote this to a childhood friend who had then become a doctor...

For the last three years, my hearing has grown steadily weaker. I can give you some idea of this peculiar deafness when I must tell you that in the theater, I have to get very close to the orchestra to understand the performers, and that from a distance, I do not hear the high notes of the instruments and the singers’ voices.

Sadly, Beethoven has to wrestle with his fate of losing his hearing, and the opening to Symphony No. 5 is often called “fate knocking at the door.” That's why it's often played over pivotal moments in movies. An unsent letter to his brothers dated 1802 and titled the Heiligenstadt Testament was found in Beethoven’s apartment after his death. It showed how greatly this hearing loss was affecting him and his music...

O ye men who think or say that I am malevolent, stubborn, or misanthropic, how greatly do you wrong me. You do not know the cause of my seeming so. From childhood my heart and mind was disposed to the gentle feeling of good will. I was ever eager to accomplish great deeds, but reflect now that for six years, I have been in a hopeless case, made worse by ignorant doctors, yearly betrayed in the hope of getting better, finally forced to face the prospect of a permanent malady whose cure will take years or even prove impossible.

So he sought out natural cures and spent much time in nature, listening and observing. And there was one high-pitched sound he could still faintly hear (or remember hearing) through the constant ringing... the chirping of the ortolan bunting songbird.

The ortolan was prevalent across Europe before becoming endangered, and Beethoven no doubt sat listening to birdsong at Prater Park in Vienna, where he resided at the time.

You can find clips of it online, and the bird’s tune is so strikingly similar to the opening of Symphony No. 5 that it’s commonly accepted as the source of Beethoven’s inspiration for his most well-known composition.

The intervals, phrasing, and timing are spot-on: three short notes followed by a final, longer note lower in pitch. In music theory, this lower interval is called the minor third. The key — C minor — may even be the same.

Like the impressionists, Romantic poets, or even Shakespeare, it’s clear for this composition — and perhaps many others — that Beethoven simply sat and observed the natural world and translated it into his art.

As for the ortolan bunting...

It’s suffered a much darker fate.

The ortolan became endangered in the early 2000s because of its use in an expensive, decadent French dish coveted by the political elite. But it’s the inhumane treatment of the bird that’s problematic, and if you're upset by animal cruelty, you may want to skip ahead.

First, the ortolan is trapped in a small cage. Just as foie gras is made by overfeeding geese, these songbirds are overfed, too. As the ortolan feeds at night, the chef blinds the bird by poking its eyes out, causing it to gorge itself on figs and oats left inside the cage. Once it’s fattened up, it’s drowned alive in Armagnac brandy, cooked, and served.

The ritualistic act of eating the dish adds to its intrigue as well. Diners shroud their heads with a white napkin — some say it’s to savor the aroma, while others say it’s to hide their shameful and gluttonous act from the eyes of God. The bird’s then eaten whole, bones and all.

This now-infamous image appeared in a New York Times story about French chefs who want to bring the dish back to restaurants. 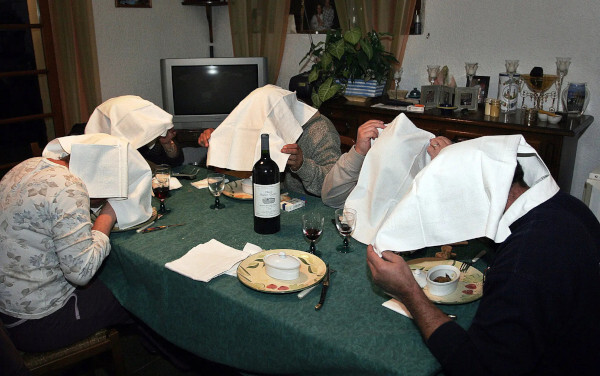 The meal has even recently made its way into popular culture, appearing in Showtime’s "Billions" and HBO’s "Succession." It’s the ultimate culinary and gastronomic statement of excess and depravity.

The dish was outlawed in 1999. But of course, just because something is illegal doesn’t mean people will stop doing it. The bird’s population continued to decline, falling 30% from 1999 to 2007. It’s since made a comeback, as anyone caught trapping the ortolan faces a 6,000-euro fine per bird.

But the political elite will always use their cash and connections to get around any laws.

Fate Knocking at the Door

The political elite are playing a different kind of game in Europe...

And it’s getting more dangerous by the minute.

It was reported that Russian forces launched a rocket attack at the International Peacekeeping and Security Center in the Lviv region, just 15 miles from the Polish border. It’s where much of the supplies flow from European allies to the Ukrainian military.

Last week, I wrote that U.S. military funding is only going to increase. We got proof of that, as President Biden just signed the Consolidated Appropriations Act into law, which increased defense spending by $32.5 billion over last year’s budget. In fact, out of the entire $1.5 trillion bill, the most money — $728.5 billion — is going to defense spending, including a 2.7% pay increase for active duty troops.

And a big chunk of that money will go toward top-secret military programs that our aerospace and defense expert Jason Simpkins calls “The Black Budget.” That means a windfall not only for defense contractors but also for companies creating new technologies behind the scenes that aren’t publicly available yet.

Today, Jason's extending a special invitation to all fellow Outsiders. Here you'll get a sneak peek of his latest intelligence report, detailing the exciting tech to come out of these secret programs and the best way to play it before it goes mainstream.

The last time Europe was facing this type of crisis was in World War II, when BBC broadcasts to the mainland began with Beethoven's Symphony No. 5, a representation of the Morse code letter “V” for victory, or “dot-dot-dot-dash.”