Uranium prices have shot up 60% since mid-August, with spot prices topping out at $48 per pound — their highest level in nine years.

On the one hand, that shouldn't really come as a surprise. In fact, it should have happened much sooner.

Uranium sources have been under-developed ever since the Fukushima disaster in 2011. Back then, uranium prices were as high as $70 per pound, which is about the cost of mining the metal. But in the decade that followed, prices plunged as nuclear power faced a flurry of scrutiny not seen since Chernobyl.

They even fell below $20 per pound at one point, spurring outcries from contrarian investors like myself.

In fact, not to brag (or maybe to brag a little), I called the market bottom...

"Today it's worth just $20.25 per pound," I wrote in 2017. "Still, that's up from where uranium prices were a year ago, which was below $19. So it's actually come up a bit in the past year. In fact, I think it's fair to say we’ve bottomed out... and any investor with patience and foresight could make a really healthy investment right now."

Today, I'd say that patience paid off. And indeed it has for my Wall Street's Proving Ground subscribers who cashed in gains of 258% and 311% on uranium stocks I recommended last November. 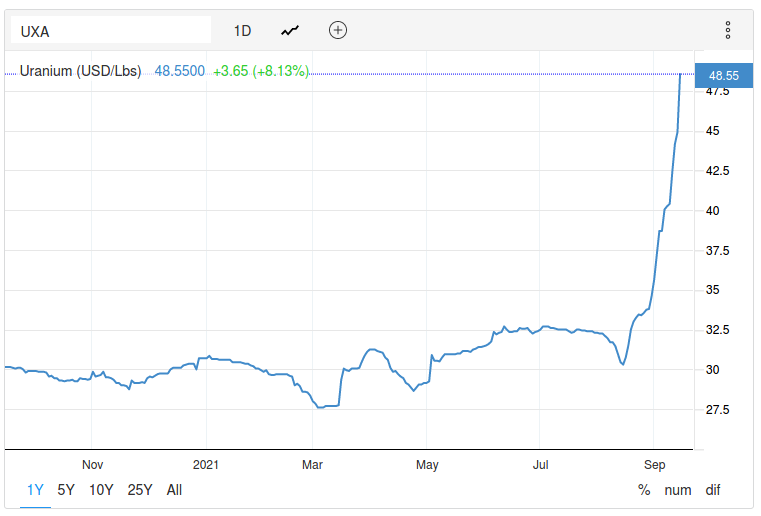 Those recommendations were prompted by a drastic supply-demand imbalance. Indeed, 85% of uranium producers were wiped out of the market from 2011 to 2020 and exploration ground to a halt. So for years, demand outstripped supply, but it didn't much matter because there was so much cheap uranium on the spot market.

There, utilities and investors could acquire the metal for a fraction of what it cost to mine.

Again, for years, that wasn't a problem. But something changed this July.

That is, on July 19, Sprott — the global investment fund that specializes in commodities founded by famed billionaire Eric Sprott — launched the Sprott Physical Uranium Trust.

That fund gives investors direct exposure to uranium, and it's drawn a (figurative) ton of interest. It started an at-the-market equity issuance of $300 million in mid-August and in less than a month raised $244.7 million. Last Friday, the fund increased its authorized issuance by another $1 billion to meet investor demand.

And almost all of that money is being poured into uranium, sucking millions of pounds out of the spot market.

It's amassed almost 25 million pounds of uranium since it was first launched, which is more than a quarter of the total uranium spot market value (92 million pounds last year). It even bought 850,000 pounds in a single day last week.

It's a wise investment, because as I said, uranium has been under-developed for so long and production is lagging demand.

Furthermore, that imbalance will continue to widen in the years ahead. This is because governments around the world have come to understand that nuclear power must play a pivotal role in cutting carbon emissions.

Hear me when I say this: Renewable sources, like solar, wind, hydro etc., simply cannot take the burden off of coal and natural gas. They just aren't efficient enough.

If we're going to cut carbon emissions, we need nuclear. You can't do it without it.

Investors are starting to figure that out, too. And I don't just mean Sprott.

Retail traders from Reddit’s r/WallStreetBets (those of the Gamestop and AMC squeezes) are suddenly very curious about what's going on in the uranium market.

Cameco Corp. (NYSE: CCJ), the world's largest uranium miner, has become the third-most-discussed company on r/WallStreetBets after tech giants Apple Inc. and Alibaba Group Holding Ltd., according to SwaggyStocks, a website that tracks mentions of ticker symbols on the forum.

And a page on Reddit called r/UraniumSqueeze has attracted more than 13,000 members since it was created in February. It describes itself as “dedicated to all the investors and traders passionate about the uranium market.”

Of course, that doesn't mean that now is the time to invest. Quite the opposite, actually. I think anyone sitting on triple-digit uranium gains ought to take this opportunity to sell.

Don't follow Sprott into the market. Sell into them.

Once they're done buying, prices should moderate and slip back down into the $30s. That's where I'd target any future nuclear purchases.

Then, be prepared to wait. It could be another couple years before uranium takes the next leg up. But ultimately, supplies will dwindle, and prices will have to climb above their production cost.