Even in This Economy, Cash Is Still King

Use cash while you still can...

Do yourself a favor...

The next time you need to buy something, do it in cash.

Before you leave the house, grab a money clip or rubber band and fill it with the greenback.

And don’t let anyone tell you otherwise...

Even in this economy, cash is still king.

It even adds a nice layer of mystery to you as the cash holder.

Just take a moment to observe your surroundings when you use cash.

When you check out, get a good look at the cashier's reaction.

It helps if you pull out a hundo.

Better yet, grab some $2 bills and really blow someone’s mind.

Are they looking at you differently?

Maybe with a little more curiosity or even respect?

Over Memorial Day weekend, I ponied up and bought some blue crabs for me and my significant other.

I got a dozen jumbos.

They weren’t cheap, as the state of Maryland reported last month that the blue crab population is at its lowest level in 33 years.

But they were worth it. 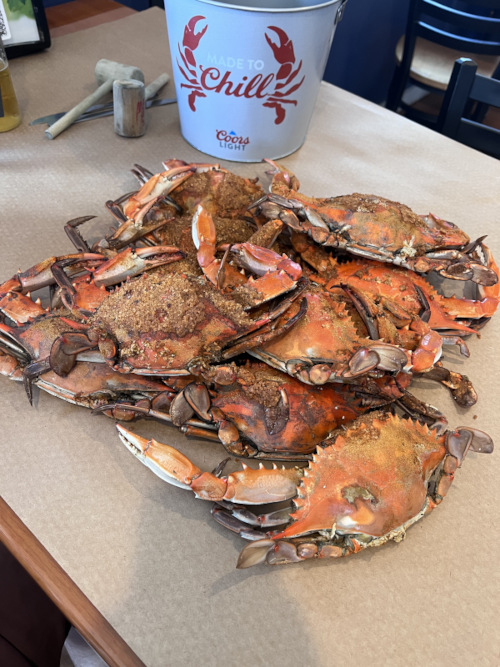 Could have used a little more Old Bay.

But there’s something about paying for crabs in cash that just feels right.

It’s raw and visceral... the way it should be.

After all, you’re not standing there like every other schlub fumbling with a piece of plastic wondering where to tap or swipe or insert...

You’re in control of the whole transaction.

And the cashier gets to make change, an underrated skill these days.

Also, you most likely have only a finite amount of cash on hand, so you have to plan ahead, do some quick mental math, and grab what you need before you leave the house.

It’s a win-win for everyone involved.

Everyone except for the government.

And that’s a big problem for those who want to trace your every move...

One reason the powers that be want to ban cash is because they want to control what you buy.

Imagine a world where banks don’t pay you interest for keeping cash with them, inflation eats away at the purchasing power of any money you have, and the money you make is taxed until you don’t have any more.

Oh, wait, that’s the world we live in right now...

But what if the government gave you a credit every month, and all your transactions were tracked?

And once you surpass your credit limit, you can't make any more purchases.

Or if you try to buy something deemed unfit for consumption, your purchase will be denied.

Well, we may not be that far off.

The Doconomy MasterCard lets users track and understand their climate impact through their purchases.

It’s being painted in a positive light by MasterCard for now...

In addition to offering users to make their consumption more sustainable, customers can also apply for the physical, climate-friendly and biodegradable DO Mastercard payment card. The card, which is printed with recycled pollution (Air-Ink) and with no magnetic strip is the first of its kind in the world. The DO card is the most tangible payment service effort...

You know it's a problem when the United Nations is getting behind it.

But what they’re not telling you is there’s a hard limit on your purchases under the guise of saving the planet.

If the company deems what you’re buying to be unsustainable or not climate friendly, your transaction will be denied.

That’s a slippery slope if I’ve ever seen one.

Who exactly gets to decide what you can and cannot buy?

It's quite clearly a monetary system of complete control.

We're going to be seeing a lot more of this, especially now that governments around the world are creating their own “digital dollars.”

Since I started writing for Outsider Club, I’ve been pounding the table about how governments will not sit back and let crypto take over the financial system.

It poses too big a threat.

So they’ll create their own government-backed digital currencies, which will bring the whole decentralized financial system to its knees.

On its face, it seems like a decent idea...

Give citizens a digital wallet or credit card with preloaded money on it and call it a day.

In fact, we’re seeing this idea play out right now.

Just at the beginning of this year, the Federal Reserve released a report outlining the benefits and drawbacks of a central bank digital currency (CBDC).

The basic argument is that the majority of purchases in the U.S. are made without cash using popular payment apps like Venmo, Zelle, and PayPal. So a CBDC could bypass third-party companies and let money flow directly between the buyer and seller, effectively acting as a cash supplement (or replacement).

What’s more is the Fed asked for public comment on the report, and some responses are downright hilarious, including “Don’t use digital currency” and “I don’t give a sh*t what they do.”

As always, it pays to have a healthy skepticism any time money is involved.

And amid all the noise going on right now, cash talks the loudest.

This year is turning out to be a doozy in the market.

As the saying goes, the market can remain irrational for much longer than you can remain solvent.

We're truly living through history, and we're honored to have you following us through these historic times.

As the weak hands are getting shaken out of the market, the worst thing you can do is turn away from it.

There are two proven strategies in times like these.

First, precious metals are still a great place to park your money, as they can also act as a form of cash in times of trouble.

To learn how to grow your purchasing power with precious metals this year, check out our latest metals find and why it spells big trouble for Elon Musk and the entire EV sector.

And don't forget to get a bird's-eye view of where the rich and powerful are putting their cash amid all the chaos so you can follow them as they navigate the market.