Is this the end for Musk?

We finally made it.

If you’ve stuck with us thus far, we thank you.

Compound interest works in your favor.

Crypto companies are a scam.

Securities prices will ebb and flow but will always go up over time.

Unconstitutional laws continue to benefit the rich and punish the poor.

Big Tech companies willingly ignore the suffering of the people who make their own devices.

And stocks continue to be the best place to grow your money.

The three sectors I see getting the most attention this year are energy, health care, and electric vehicles.

New Forms on Energy Are Coming

The breakthrough in energy came in the form of nuclear fusion this year.

Forbes says it’s the future of clean, limitless energy and that investors have decades of “opportunities ripe for the plucking.”

So place your bets now.

Even though researchers say infinite energy is 40 years away, in that time, we’ll see a major shift in the way energy companies are valued in the stock market.

There’s going to be a huge shake-up.

Nuclear fusion could be the answer to lowering costs and maximizing production, ushering in a new era of renewable technologies.

We’ll be watching this closely.

One sector that’s getting a lot of attention lately is magic mushrooms.

Psilocybin, the psychoactive ingredient in magic mushrooms, is being tested in therapeutics.

And we could see legalization of the compound soon.

We know this because two of the big players in the space, ATAI Life Sciences (NASDAQ: ATAI), and Silo Pharma (NASDAQ: SILO), have had some big insider buying as of late.

Back in April, Apeiron Investment Group, a family office that invests in life sciences, fintech, and hospitality, purchased more than $2 million worth of shares.

And just this month, Silo Pharma CEO and President Eric Weisblum bought more than 600,000 shares of his own company.

This is a sector you’ll want to pay attention to in 2023.

That’s because companies are cheap relative to those in the medical marijuana sector, and the evidence points to psychedelics holding more medicinal power.

Not to mention they're now considered safer by researchers.

A pattern emerges when you compare the harmfulness of different types of psychoactive drugs: Alcohol and hard drugs like heroin and cocaine rank as the most harmful, while psychedelic substances like psilocybin and LSD score as the least harmful. It’s perhaps not too surprising. After all, psychedelic substances are generally non-toxic and medically safe to consume. The drugs do not come with the same kind of overdose risks that substances like alcohol and heroin do. Still, psychedelics can have profound effects on the psyche. Bad trips are a real phenomenon. But bad trips are sometimes the result of an interplay between the drugs and the user’s environment. As explained by Dr. Matthew W. Johnson, a professor of psychiatry and behavioral sciences at Johns Hopkins, the conditions under which someone experiences psychedelics can significantly influence the trip — for better or for worse.

Johnson further explains, "There were a lot of overstatements and urban legends about the dangers of psychedelics. Things like, you know, that it was common for teenagers to stare into the sun and burn their eyes blind because they were on LSD. There's no credible evidence that ever happened."

In many of the original experiments, including MKUltra, researchers dosed people with huge amounts of LSD and kept them in a padded cell, tied them to a bed, or didn’t even tell them they were being dosed.

Recent experiments, however, have shown that psilocybin is effective at treating things like PTSD as well as OCD and other anxiety disorders.

This market will surely gain momentum as talks of decriminalization and legalization continue.

Finally, on to the man everyone loves to hate…

Electronics manufacturers have found themselves in a bit of hot water lately.

Specifically those using batteries, which is basically every major manufacturer, including Tesla, Apple, and Samsung, to name just a fraction.

Siddharth Kara, a Harvard professor and expert on modern-day slavery, human trafficking, and child labor, is releasing a book next year called Cobalt Red: How the Blood of the Congo Powers Our Lives.

Last week, he spoke with Joe Rogan about the horrors of cobalt mining in the Congo.

Cobalt is an essential rare earth metal found in any electronic device that has a rechargeable battery.

I suggest watching or listening to the whole episode if you have time. 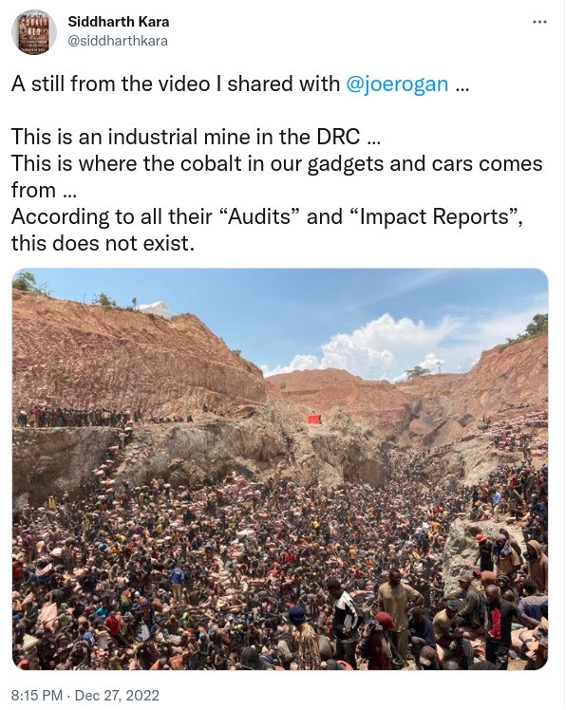 The fallout from this will be massive.

Maybe it's why Musk sold billions of dollars' worth of Tesla stock this year.

In December, he sold nearly 22 million shares, worth $3.6 billion.

In all my time covering insider trading, I'm not sure if I've ever seen such a massive dumping of shares.

It's unprecedented, and it's drawing a lot of attention.

Now, while it's true half of Tesla's new batteries are cobalt-free, it feels like it's too little too late.

It's probably why former Tesla employees are fed up with Elon Musk and starting their own company.

In fact, this new EV company is trading for less than $4, giving investors a shot at huge potential gains.

This could be bigger than Tesla.

To get the new year started off right, we've put together a presentation on the whole story.

Check it out here.