Elon Musk is to batteries what Willy Wonka was to chocolate — right down to the golden tickets and singing workers.

Both are eccentric billionaires with big dreams and fanciful factories. And both headline wondrous stories.

Of course, the big difference is that Elon Musk's story isn't meant to capture the imaginations of children, but rather the wallets of investors.

The question is, will the marvelous ride continue, sailing skyward like a giant balloon... or will shareholders slip into a river of sticky, brown goo and get sucked out a drainage pipe?

The Gigafactory had its “grand opening” on July 29, but many of its rooms are empty or under construction, and its machines aren’t yet functioning. The current size is only about one-fifth of what is expected at full build-out as construction continues over the next several years.

Still, by the time the Gigafactory is finished, it will occupy 1,864 acres, taking up three times as much land as central park.

It will double the current level of global lithium-ion battery production, pumping out battery energy of 35 gigawatt hours per year.

"Our engineering team has worked very closely with Panasonic to make dramatic improvements to the cell manufacturing efficiency,” says Musk. “I think we’re probably approaching 3x the efficiency of the best plant in the world. I think that’s pretty good. Cells will be going through that thing like bullets from a machine gun.”

The expectation is that rail cars of raw material from mines will pull into one side of the Gigafactory and completely finished battery packs (Musk hopes one day whole cars) will pop out the other.

It's an ambitious idea that's never before been tried.

In June, a select group of Tesla customers, those who pre-ordered Tesla's Model 3, were emailed “golden tickets,” inviting them to tour the factory.

One of the things observers noted: There are robots everywhere.

Equipped with sensors and lasers to help guide them, the robots self-navigate by following magnetic tape on the ground.

“Welcome to Tesla,” one robot lifting up pallets of battery cells would say.

Another played the Indiana Jones theme song to signal to workers to get out of the way.

Meanwhile, robotic arms assisted humans in making the battery packs at the plant. 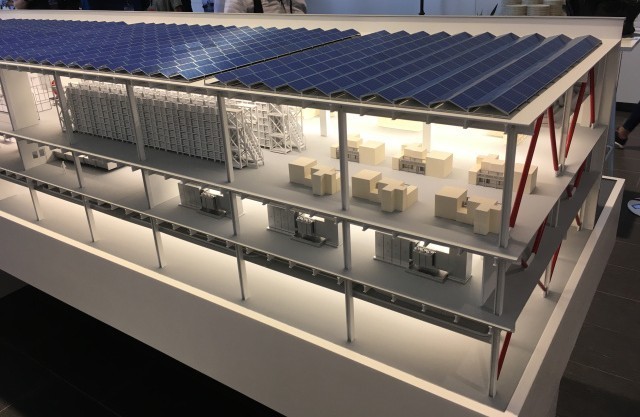 'Efficiency' is the buzzword.

Tesla wants to drastically reduce the cost of its batteries, and its cars, through economies of scale.

Once the factory is fully operational by 2020, Tesla estimates the factory will enable it to reduce its battery prices by about 30%. That's enabled the company to price its Model 3 at about $35,000 — half the cost of a Model S.

The Gigafactory is also being used to put together Powerwalls, which are batteries that store energy for home use. Solar panels can charge the batteries during the day so they can be used at night. Musk estimates that as demand for stationary power storage increases, about half of the Gigafactory’s business will be making Powerwalls.

The other half will satisfy demand for the rapidly growing electric vehicle market.

Indeed, sales of new electric vehicles have been at record levels every month this year, exceeding 15,000 units and 1% total market share for the first time ever in June. Sales are up an impressive 45% year-over-year in June and have surged nearly 20% year-to-date.

Electric vehicles are also getting cheaper.

Government credits can drive the price of the Model 3 down below $30,000.

By 2020, Tesla plans to build as many as one million vehicles per year. That's a bold goal. The company only produced a little more than 50,000 vehicles in 2015.

Furthermore, the company recently said that the cost of building and operating the Gigafactory could exceed the company's expectations, and result in the plant taking longer than expected to come online.

That's not a total shock given the scale and complexity of the project. But it's not a good sign, either. If the project is nagged by repeated delays and cost overruns investors could bolt. It'd be a big blow to Tesla and a personal embarrassment for its founder.

Tesla is pouring more than $5 billion into the Gigafactory, and Musk raised the stakes in 2015 by accelerating the construction schedule by two years.

For that reason, investors might not want to go all-in on Tesla stock.

A better idea might be to focus on the raw material that goes into electric car batteries — lithium.

Remember, every other major car manufacturer, plus Apple, is competing in this space. Ford, Daimler, Audi, Tesla... You name it. So rather than bet on a single player, a “picks-and-shovels” play could be a boon.

Especially when you consider the Global X Lithium ETF (NYSE: LIT). It’s up a bit more than 40% in the past six months — outperforming the S&P more than twice over. Lithium itself is on pace to double in value this year, rising to $10,000 per metric ton from $5,000 nine months ago.

But the real bonanza is likely to come from a small stock Nick Hodge recently uncovered for his Early Advantage subscribers. You can get all the information about that company, as well as Nick's complete lithium report, by clicking here.