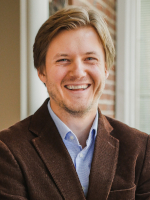 Forged in the fires of the Great Recession, Alexander Boulden learned the hard way that investing, like life, can beat you down. Perhaps that’s why he gravitated toward Bitcoin once he witnessed firsthand the recklessness and greed of the top U.S. bankers and government officials.

On the outskirts of society, Alexander lived on a sailboat after college to save money and found that he had to think outside the box to be successful... because no one is going to save you when you fall.

A dual citizen of the U.S. and the U.K., Alexander has a unique perspective on world affairs and has experienced nearly every facet of the American workforce, from the services industry, government agencies, public schools, hospitals, and universities to one of the most successful financial research firms in the world.

There, he rubbed elbows with top investment experts, including former Chicago Board Options Exchange floor traders, Wall Street hedge fund managers, and International Monetary Fund analysts. He learned to take calculated risks with his investments and profit whether the market is up, down, or sideways.

He has a passion for helping others succeed, whether through tutoring or volunteering, and will guide you through the convoluted world of the mainstream media and so-called investment analysis.

When he’s not finding the best value and income plays for your portfolio, you can find him playing the skins at your local brewery or solving sketchy bouldering problems at a climbing gym near you.

He believes hunger is the biggest driver of success, so whatever you do... Stay hungry.

Alexander joined Outsider Club’s editorial team in 2020. He is also the founder and editor of Insider Stakeout. His investment service specializes in compiling SEC forms filed by company insiders, hedge funds, and politicians, and then cross-referencing them for volume and momentum — giving his readers access to the hottest stocks that aren’t on most investors’ radars.

The Big Money Is Piling Into THESE Companies

Will the U.S. Plunge Into a Recession After the World Series?

Think AI Is Coming for Your Job? Not So Fast...

This Will Alter the Course of Human History

Final Warning: Protect Yourself Before It's Too Late

Buy This Stock Before Biden Signs the CHIPS Act Tomorrow

Is Nancy Pelosi Going to Jail?