I can almost taste the rainbow stew.

For the past few weeks, we’ve been telling you about “blue gas,” and its ability to power cars, trucks, and other machines:

And the only thing that comes out of the tailpipe is water.

See, unlike battery cars that need to be charged and still have a limited range… cars using this new technology have real engines that burn real fuel.

But instead of being powered by gasoline or diesel or costly biofuels… these “Tesla Killers” run on a unique type of fuel called “blue gas.”

It’s not quite burning water, but it’s darn close.

And just as the Hag envisioned over three decades ago… it’s being used to power planes as well.

This past fall, a California company unveiled the world’s largest zero-emission aircraft that flies without any support from fossil fuels.

The Federal Aviation Administration has approved it to operate for test flights.

Tesla’s electric batteries could never power a plane — they’re too heavy and too expensive.

And just like Merle said, we’re gonna be eatin’ that rainbow stew in a silver spoon!

The “Tesla Killer” stock behind this technology is absolutely exploding.

It’s doubled in a month. But much more is ahead as “blue gas” goes global. 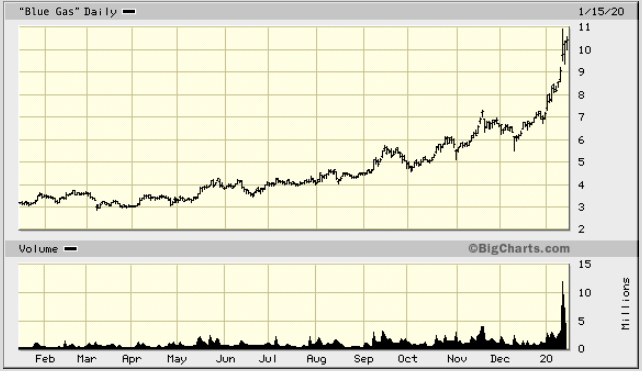 See why it could soon be trading higher than Tesla at $500 per share!

Batteries Now Obsolete? The “Tesla Killer” Is Here
American-Made "Blue Gas" Has Elon Musk Furious!
Did "Blue Gas" Just Make Batteries Obsolete?
Auto industry insiders have dubbed blue gas as the "Tesla Killer." Outsider Club founder Nick Hodge explains how investors can get in on the next evolution of the automotive industry and take advantage of the Tesla Killer...
Jesus, Babe Ruth, and the Future of Energy
Outsider Club editor Jimmy Mengel recalls previous business trips to California and the success it has brought him and his readers. His latest trip to California proved to be no different as he reveals what he discovered and has referred to as the "Future of Energy."
Toyota (and Others) Go All In on This “Tesla Killer” Tech
There are only a handful of companies working on the next-generation tech that will be installed in this massive wave of new clean energy vehicles. Outsider Club editor Adam English explains how investors can get in on the ground floor...
Investing in Marijuana Without Getting Burned
The marijuana industry has rewarded scores of investors with life-changing gains.