Don't Say I Didn't Warn You About a Civil War

Way back in September, I sent a somewhat dire warning out to Wealth Warrior (now Wall Street's Proving Ground) subscribers.

In short, I said we were "headed for a civil war."

You see, this was immediately following the first presidential debate, in which Donald Trump told his white supremacist followers to "stand by."

Then to answer my own question: "The conflict that arises when he refuses to leave office, that's what."

I said a lot of things in that email.

If Trump manages to override the results of a legitimate election, the protests and counter-protests will continue and ultimately boil over. If he loses and is ultimately forced out, he will never stop crying foul and will continue to incite those white supremacists and militia groups to take up his banner with acts of violence and aggression...

Donald Trump has made clear that you're either with him or against him. If you're with him and commit crimes and violence on his behalf, he'll cheer you on and do all he can to shield you from prosecution. If you're against him, he'll use the full weight of his office and influence to ensure your ruin. Self-preservation is his only instinct. It's his only guiding principle.

And with the polls leaning heavily in Joe Biden's favor, Trump is more vulnerable now than he's ever been before. Adrift in a sea of insecurity, he's flailing wildly, seeking help from anyone in a position to provide it no matter how nefarious they may be. He's desperate to save himself and he'll drag the whole country down with him if he can't.

Unsurprisingly, not everyone loved that analysis.

But given what happened Wednesday, I think it's clear that I wasn't overreacting. That wasn't hyperbole. It's reality. 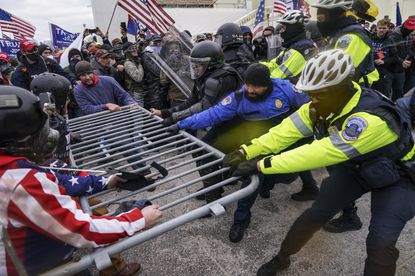 I can't be anymore clear about this: Our democracy is eroding. It's backsliding. It's breaking apart.

And Wednesday's coup attempt was part and parcel of that.

Joe Biden won the election. Sorry if you don't like that, but it's what happened. He won it clearly and he won it fairly.

And as I predicted, Donald Trump is lashing out — crying foul, fabricating claims of fraud, demanding that state officials and electors override the will of the people. He's threatening and punishing people who don't play along with his ruse.

People like Mike Pence who had one job yesterday, which was to open a crate of certified election results and read them to a joint session of Congress. All he set out to do was his constitutionally mandated duty.

And then, when they were furious with indignation, he directed them to the Capitol building.

Then he jumped in his motorcade and went directly back to the White House to watch the carnage ensue on Fox News.

And boy, was he pleased with it. It was everything he'd hoped for short of stopping the electoral vote count from happening.

And as the nation looked on in horror at the ransacking of our nation's seat of power, and even as staunch allies turned against him and implored the president to speak out, he sat idle. That is, until he meandered onto the White House lawn to shoot a video in which he reitereated his false claims and accused his opposition of trying to "take it away from all of us" before telling his supporters that they'd done enough.

So, in sum, a sitting president incited a mob of his most fervant supporters to overrun the Capitol to disrupt a constitutionally mandated bipartisan vote count in a desperate bid to overturn the results of an election he legitimately lost.

That alone is bad enough. If those around him were anything less than abject cowards, Donald Trump at the very least would be immediately removed from office.

The fact that he hasn't been removed already is a shocking indictment of our democracy. It's nothing short of an embarrassment that this behavior is considered acceptable by many and justifiable by some.

But what's infinitely worse is that in spite of all of this, Trump and his dishonest, autocratic effort to overthrow the government has found traction among American lawmakers. 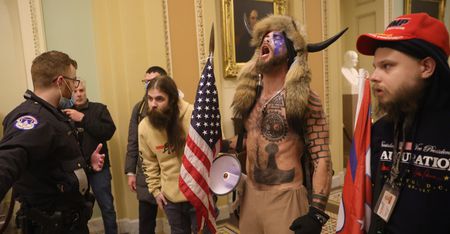 When the idiots were all finally cleared from the halls of Congress and the vote count resumed, 138 House Republicans (almost two-thirds of the GOP caucus) and six senators registered objections to a free and fair election.

There was no epiphany. There was no "come to Jesus" moment that suggested to these bad actors that things had gone too far.

To them, lying to the American people, inciting mob violence, and a blatant attempt to defile and intimidate the entire body of Congress is... fine.

And few of them will be going anywhere anytime soon.

Rather than being run out of Congress, those behind this anti-democratic effort will continue to serve (or, in the case of Trump, rant on Twitter), demonstrating to the American public and their contemporaries that this is a durable mode of governance; that it is possible to defy tradition, decorum, the will of voters, and the rule of law itself in the name of political expedience.

And that hideous demonstration will have irreparable damage.

In fact, even before Wednesday's kerfuffle the mere suggestion of impropriety was already undermining our government.

In Pennsylvania, the state GOP refused to seat a Democratic senator whose Election Day victory was certified by state officials and upheld by the state's supreme court merely because his opponent continues to press unfounded claims of voter fraud.

This is the new state of play in America.

Losing an election no longer means you lost an election. It means you're free to cast evidence-free aspersions on your opponent, and if you're lucky there might be enough people in your party to go along with the charade.

It's an effort to delegitimize not just elections but multiparty governance.

For these faithless politicos, single-party governance is now the only acceptable form of governance.

This is the path they've chosen. The die has been cast. And if they continue find success with their efforts, it won't be much longer before our entire government collapses.

But so far, things have gone roughly how I said they would.

And just to tidy things up, stay in my lane, and give you an investment angle: Buy gold.

Because if our Constitution isn't worth the paper it's printed on, then our currency sure as hell isn't either.