Did You See My Oil Price Prediction?

About a year ago, I wrote an article about oil and gas prices.

In that article, I made it clear that I was bullish on oil prices, noting: "Oil prices have staged a comeback and are now trading above $65 per barrel — an 80% surge from their October lows. Better still, for the industry at least, they're poised to shoot even higher."

A few months later I wrote another article, doubling down on an oil price spike...

"In the short-term I foresee us hitting $80 per barrel in the next few months," I wrote. "And in the long-term, a year or two, I think we'll see triple-digit oil prices for the first time since 2014."

Well, here we are, seven months later, and the oil price prediction I made has come to fruition.

Oil prices rose to their highest level since 2014 this week, with WTI crude hitting $86 per barrel and Brent oil teasing the $90 mark.

That means we're right where I said we'd be. And more than that, we are indeed on track to hit $100 oil this year.

Oil is a pretty easy commodity to predict, because it just about always comes down to supply and demand.

And over the past year, demand has shot steadily higher while supplies have remained relatively stagnant.

After slumping to 88.5 million barrels per day in 2020, global crude consumption bounced back to 96.2 million bpd in 2021, according to the International Energy Agency.

And this year, it's expected to stalk even higher to 99.5 million bpd. That would be almost exactly where it was prior to the pandemic — and a near-record high. 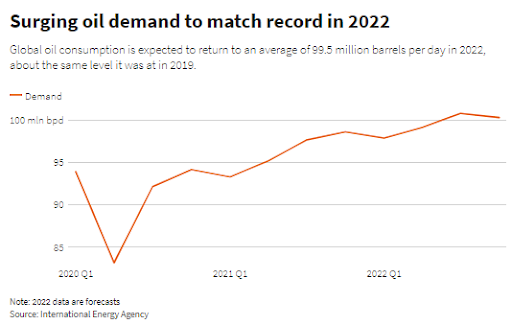 However, supplies haven't come back as quickly.

You see, the world's leading oil producers — OPEC, Russia, and its Eurasian allies — cut production deeply in 2020, siphoning a total of 9.7 million bpd (about 10% of global demand) off the market.

As demand returned the group said it'd ramp back up and increase production by 6.4 million bpd, and further promised to boost production by 400,000 bpd monthly until it reached pre-pandemic levels.

Of course, that's not what they're doing.

The group known as OPEC+ raised its production by just 250,000 bpd in December, which is only 60% of what it promised. All told, the group is pumping 790,000 bpd less than what it said it would.

Furthermore, technical malfunctions and supply bottlenecks have undermined production elsewhere in the world.

Nigeria pumped 460,000 bpd below its quota last month after it was forced to shut down a major export terminal. Angolan production has fallen to 17-year lows. And Iraq’s production capacity has been diminished by 140,000 bpd because pipelines are either decaying or being sabotaged by insurgents.

Other countries like Libya and Kazakhstan could see their production undermined by political unrest, and a potential invasion of Ukraine could lead Russia to cut its exports to Europe.

And for their part, U.S. shale producers have remained disciplined and even constrained by higher break-even drilling costs related to materials and labor.

So barring an unforeseen economic collapse, triple-digit oil is a near-certainty.

Bank of America even believes WTI will hit $117 by July and that Brent will reach $120.

Numbers like that haven't been seen since the commodity boom that accompanied the Great Recession.

For that reason, oil stocks are an appealing place to hide out while tech companies and growth stocks take their lumps.

And make sure to gas up your car because gas prices are going to test $4.00 per gallon before long.