Deep Value Comes to the Market

How insiders are playing the market right now...

“Worry is the interest paid by those who borrow trouble.” — George Washington

We got some good news here in Baltimore. Paul McCartney’s playing Camden Yards on June 12. I saw him years ago at Nationals Park, and I highly recommend seeing him if you have the means. Tickets are a bit dearer than your normal concert, but it's worth it.

Markets are closed today, thank goodness. It gives us an opportunity to find some deep value after the Dow's second-straight losing week.

There’s fear in the markets from a disappointing earnings season, the Ukraine crisis, and pandemic-related supply chain issues.

In terms of earnings, one company in particular got hit so hard that Jim Cramer's had to eat crow.

Not 10 years ago, the “Cramer bounce” phenomenon was in full swing. That’s when Jim Cramer of CNBC’s “Mad Money” would mention a stock and it tended to coincide with its price rising 3% on average. But now it's having the opposite effect, with many stocks falling after Cramer’s “buy” recommendations.

At the beginning of December, Cramer mentioned PayPal (NASDAQ: PYPL) as a stock nearing a bottom, saying, “I know some sellers are motivated by PayPal’s not-so-hot chart. I’m motivated by the fact that the stock’s down 131 points from its $310 high.” This is a lesson in taking what most market commentators espouse with a grain of salt. If they're motivated simply by a stock’s price dropping, they're not doing their due diligence.

PayPal’s now down 206 points as of this writing after a dreary earnings report and poor forward guidance. Its 2025 goal of reaching 750 million active users fell by the wayside, as it’s forecasting only 15 million to 20 million new users this year. Not to mention its bread-and-butter revenue from eBay transactions fell, as eBay has started implementing its own in-house payment system. 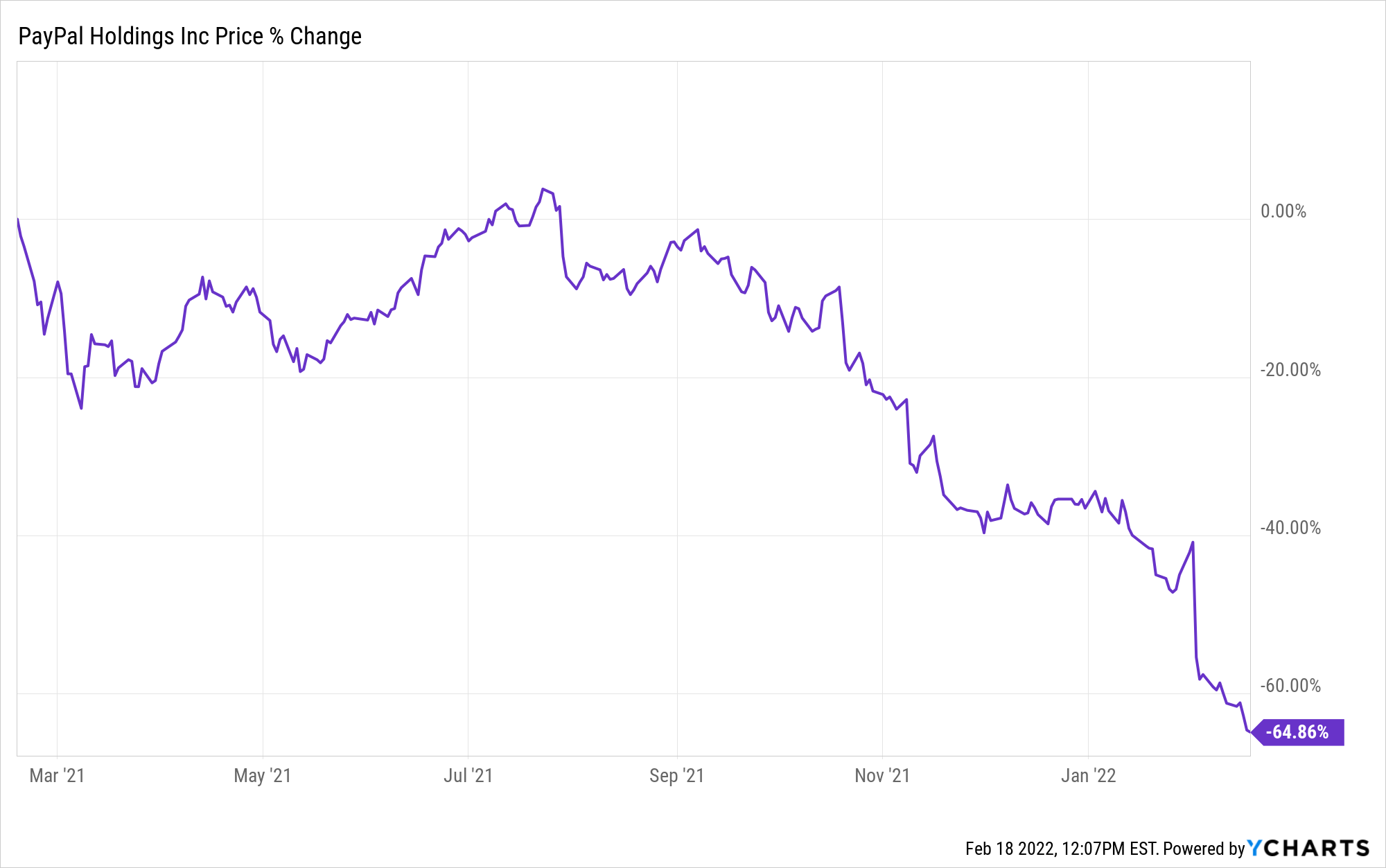 Now you never want to be in the business of catching a falling knife, as Cramer knows all too well from this pick, but there are signs Wall Street is overreacting.

How do we know?

On February 3, PayPal President and CEO Daniel Schulman purchased 7,994 shares for nearly $1 million at $124.57 a share. Late last year, three directors purchased more than $2.5 million worth of stock at an average price of $190.32. And two more directors just purchased $1.5 million worth at an average $122.09 per share. We should strive to purchase stock for less than the insiders paid.

In Washington, Congressman Jim Langevin bought $50,000 to $100,000 worth of PayPal on Jan. 22. Langevin is a senior member of the House Armed Services Committee, where he oversees the Cyber, Innovative Technologies, and Information Systems Subcommittee. He’s also a senior member of the Committee on Homeland Security, which tackles cybersecurity and innovation. If there’s one person who knows the ins and outs of tech companies in the U.S., Langevin’s your guy. Does he know something we don't? Most definitely.

On the technical side, the company entered oversold territory last week, with a weekly relative strength index (RSI) reading of 14.75. Remember, an RSI below 30 means the stock’s oversold. However, it’s still in a confirmed downtrend and momentum hasn’t turned higher for the stock just yet. In fact, PayPal's trading at a huge discount compared with where it was trading two years ago. And retail e-commerce is only getting stronger.

But PayPal has two critical catalysts coming up, which makes it an enticing pick below $106. (You can probably get an even better deal in the coming weeks as the Ukraine mess keeps roiling the markets.)

First, on Feb. 8, PayPal announced that it established an advisory council on blockchain and digital currencies. PayPal Senior Vice President and General Manager Jose Fernandez da Ponte said the following about the company’s latest move into the digital currency space:

As a global leader in commerce and payments with bold ambitions for shaping how blockchain, crypto, and digital currencies will provide increased access to financial services in the near term, we believe it is crucial to engage with the world’s best leaders to better understand the industry's most compelling opportunities and complex challenges. To support not only our current and future products in the space but our broader mission of leading the way toward a more affordable, efficient, and inclusive digital financial system, we have established a cross-disciplinary advisory council on Blockchain, Crypto, and Digital Currencies (BCDC) comprised of some of the world’s leading experts in cryptography, distributed technology, regulation, economics, and capital markets.

Second, and most importantly, Venmo — the extremely popular payments app — just signed a deal with Amazon to allow users to pay with their Venmo accounts. As PayPal owns Venmo, this partnership should recreate and even beat the lost eBay revenue...

So as we’ve seen again and again in this market, chasing a stock price is a fool’s errand; it pays to wait for the drop.

Get Ready for the Drop

Sometimes investing in the market can feel like you’re listening to dubstep, the early 2000s techno-adjacent musical movement, where the song would build and build until eventually dropping down into an ear-splitting, bass-thumping beat. “Get ready for the drop” became the genre’s defining catchphrase.

And now it’s become a bit of a catchphrase for the current volatile market environment.

One person ready for the drop is Charlie Munger, Warren Buffett’s right-hand man, saying the following in a recent interview:

Inflation is a very serious subject. You can argue it’s the way democracies die. So it’s a huge danger once you’ve got a populace that learns it can vote itself money. If you look at the Roman Republic, they inflated currency steadily for hundreds of years. And eventually, the whole damn Roman Empire collapsed. So it’s the biggest long-term danger we have probably, apart from nuclear war. The safe assumption for an investor is that over the next 100 years, the currency is going to zero. That’s my working hypothesis.

Munger’s certainly bearish in the long run. But drawing a comparison with ancient Rome is functionally like comparing apples to oranges.

Yes, the currency is shot to hell, inflation is soaring, and the average American has fears about running out of money. But we should take comfort in American ingenuity, knowing we have the tools to create a strong economy again. As we like to say here at the Outsider Club, “There’s always a bull market somewhere.”

This Could Be Huge

The office is buzzing this week after my colleague Jeff Siegel released a report about a company that's doing good things for the U.S. economy. And it all has to do with inflation, COVID, and the supply chain mess.

You see, the U.S. has outsourced so much of its production that the supply chain crisis is driving costs through the roof. Add inflation to the mix and businesses can’t afford to buy industrial products, medicines, or even food.

The next bull market will be in the companies driving prices down across the board and creating deflationary pressure.

That’s where this small biotech company comes in. It uses DNA sequencing of bacteria and other microorganisms to mass-produce industrial ingredients for far cheaper than current prices. You’ve likely heard of this technology already being used in synthetic meats, plastics, and medicines.

It all sounds very pie-in-sky, but this tiny company just got a boost in revenue and credibility when it was tapped to help manufacture the COVID mRNA vaccines using its DNA sequencing technology, generating several hundred million dollars in annual sales. It’s not just working on vaccines, though. According to Jeff, 60% of all materials required by the global economy could be produced using this company’s tech, meaning building materials, electronics, and even fuel.

The market hasn’t priced future revenues into the stock yet, so it’s cheap for now... But we don’t see it staying that way for long. Bill Gates is already on board, and experts predict engineered bacteria could be on CVS shelves within the decade.

This company could very well save our economy, and early investors stand to save their retirements.

This could be huge...