Bitcoin goes down in a blaze of glory...

Written by Alexander Boulden
Posted May 16, 2022

Markets rallied Friday to give a much-needed boost to the retail investor.

Not sure investors could deal with another down day, as things would have gotten even worse.

That's because we had some crazy buying activity during this market correction.

Most notably, after-hours last night, crypto billionaire Sam Bankman-Fried disclosed that he purchased a 7.6% stake in Robinhood (NASDAQ: HOOD) at $8.56.

After the announcement, volume spiked and the stock shot up 30% in pre-market trading.

This comes as crypto "hodlers" around the world are reeling from massive losses.

Not to mention all the Fidelity investors who opted to add Bitcoin to their 401(k) plans.

They're now realizing they need somewhere to put their money where it'll grow safely, albeit slowly.

And in an inflationary environment, there's no better place to put your money than stocks. You can see the lightbulb going off in people's minds now as stocks are rising.

The scared ones, however, are turning to cash...

That’s not a good sign for a company with nearly half a trillion dollars of trading volume each quarter.

I argued last year that Coinbase would go out of business...

That may come sooner than expected, as it released disappointing earnings of negative $430 million and a 19% drop in users.

The company even said that if it goes bankrupt, it would wipe out all users' crypto holdings...

What a scam of a company!

Insiders at the company won't even touch the stock. 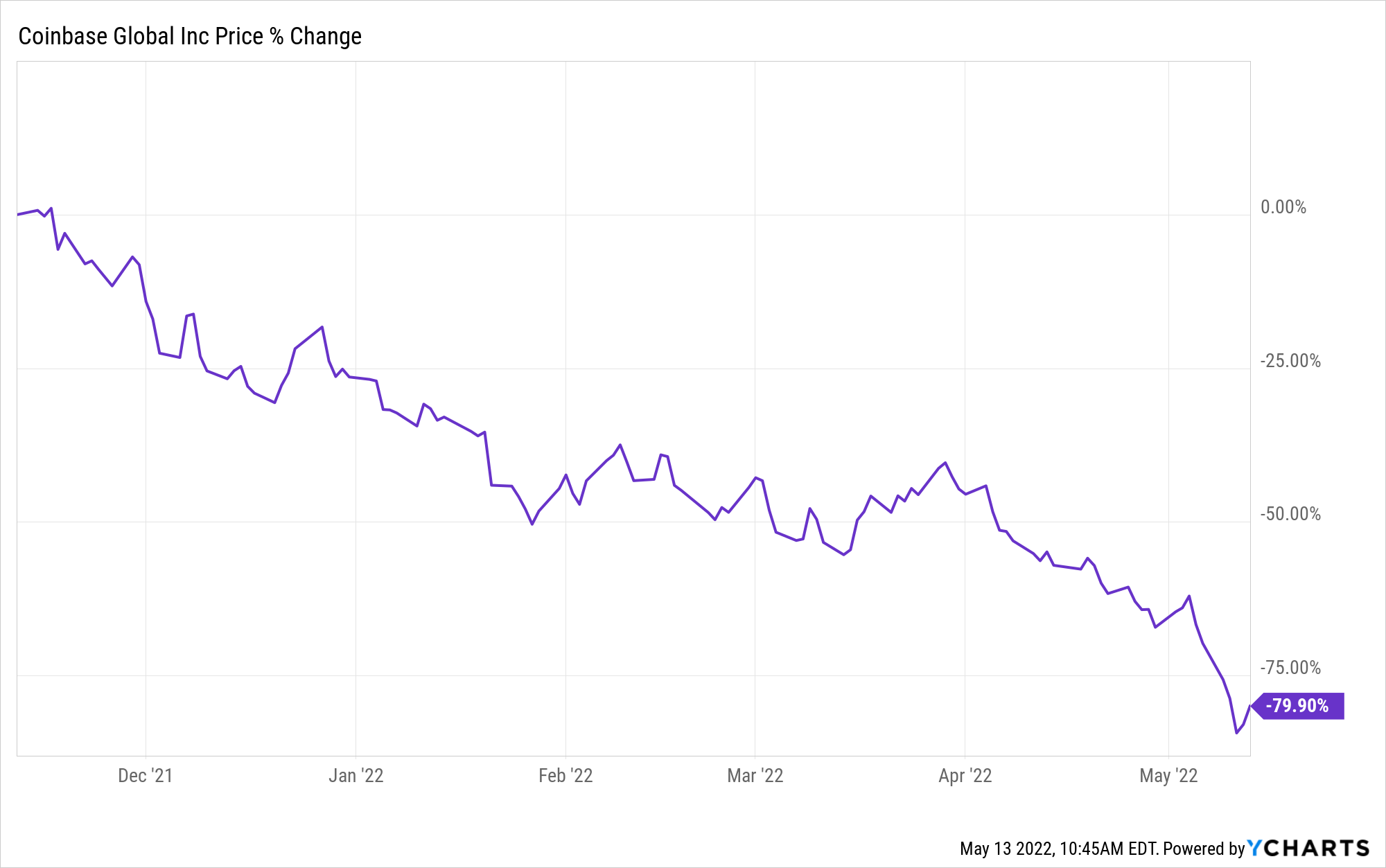 Not a good look for the crypto brand...

Haas says Coinbase’s long-term goal is to bring one billion people under its umbrella and create economic freedom for all.

What she really means is Coinbase will take care of its own employees first, as is evidenced by the company having no near-term intention of returning capital to shareholders in the form of a dividend or share repurchase.

So while the masses have been speculating on the next meme coins, management has pocketed billions.

This move to cash signals that the permabulls aren’t so confident in the staying power of crypto after all.

In August 2021, Jesse Powell, the CEO of Kraken — a leading crypto exchange — predicted Bitcoin would reach $100,000 by the end of the year, saying “I think we could see $100,000-plus a coin late this year or early next year.” He also said Bitcoin would reach “infinity” by March of this year.

Now he’s not so sure where crypto is headed. In an interview with Bloomberg Technology, he said, “It’s hard to know where it goes...”

For now, it looks like crypto will remain negative, as we can see from some of the most popular digital asset prices: 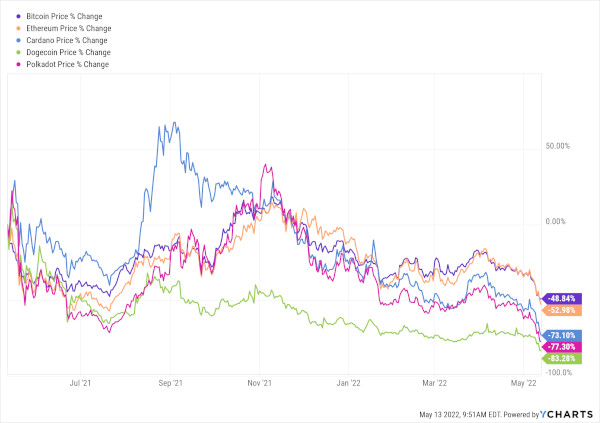 What we do know is the top crypto holders won’t want to lose money during this long, cold crypto winter.

So for all the pie-in-the-sky good intentions of democratizing finance for all, when the real money gets involved, cash (and securities) is still king.

According to a recent study by the National Bureau of Economic Research, just 0.01% of Bitcoin holders control 27% of the digital asset. That’s compared with data from the Federal Reserve indicating the top 1% of households hold a third of all wealth in the U.S.

It should come as no surprise that even in this decentralized financial world, wealth inequality is just as stark as in traditional finance.

Crypto now represents economic freedom but only for the top 1% of crypto holders, including celebrities like Elon Musk and Jack Dorsey, and institutional investors, like MicroStrategy CEO Michael Saylor.

Crypto advocates cheered when Tesla announced it would accept Bitcoin as payment for its vehicles. But just like we’re seeing across the board this year, Musk backpedaled on his promise, citing environmental worries in a Twitter post:

We are concerned about the rapidly increasing use of fossil fuel for Bitcoin mining and transactions, especially coal, which has the worst emissions of any fuel.

China got on board the environmental angle as well, saying that Bitcoin mining is extremely harmful and jeopardizes its goal of carbon neutrality.

I suspect the environment is just a scapegoat, as world nations are feeling increasingly threatened by decentralized finance and the 1% who control it.

At least, until the most recent crash.

Money (That's What I Want)

So where's all the old crypto money going?

Into undervalued stocks, of course.

And this creates upside volatility, which in turn leads to profits if you know how to play it.

We've been adamant about buying the dip here at Outsider Club, even though it may seem painful at the time.

Because just like the average investor, we're not interested in capital preservation; we're looking to grow capital in any way possible.

That's why tomorrow, you should join my colleague Sean McClosky as he reveals his new market strategy to the world.

Last week, when the markets tanked, Sean closed out two triple-digit gains. That's just the tip of the iceberg when it comes to the returns Sean's been showing his readers.

So if you're interested in participating in this free trading session and marking the start of your best trading year ever, simply click here now and enter your email address to be placed on the prescreen list.