Congratulations and Welcome to the 2% Club

The coronavirus pandemic sharply altered the way we interact with media. You may think we now consume more broadcast TV, streaming content, or online news. But a funny thing happens when people lose trust in the media and get tired of seeing mass murder on the newest Netflix special.

We’ve thankfully turned to books and other forms of media that make us feel human again, that connect us to one another. The older, simpler forms of communication — books, vinyl records, and podcasts — are coming back in style as we politely reject newfangled technologies.

Global Web Index (GWI) studied generational media consumption from April 2020 to December 2020, the supposed "height" of the pandemic. The study found that in the U.S., literature and podcast consumption rose across all generations studied — that's Gen Z, Gen X, millennial, and baby boomer. What’s more, Global English Editing found that 35% of people around the world have read more since the pandemic began.

Even with these encouraging stats, it pains me to see that Americans are woefully behind when it comes to reading comprehension. 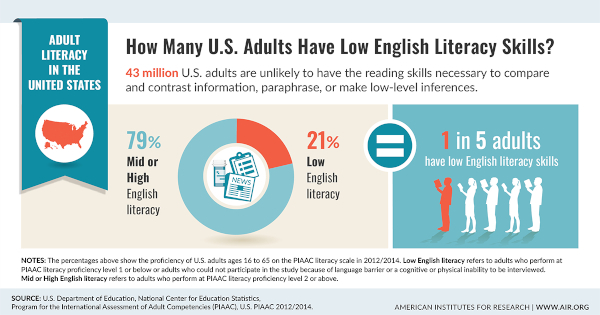 According to the National Center for Education Statistics (NCES), 21% of U.S. adults are illiterate or functionally illiterate, while 54% of U.S. adults have a sixth-grade literacy level or below. Not too encouraging for the most powerful nation in the world, especially since we know that those who control the flow of information control the people.

And if the people can’t read or comprehend what they’re reading, those who can have a distinct advantage, one that can be used for ill or good.

Remember Boxer and Clover from George Orwell’s Animal Farm? When talking about the pigs, Orwell writes...

Their most faithful disciples were the two cart-horses, Boxer and Clover. These two had great difficulty in thinking anything out for themselves, but having once accepted the pigs as their teachers, they absorbed everything that they were told, and passed it on to the other animals by simple arguments.

We all know what happens next... The pigs send Boxer to the glue factory in exchange for a case of whiskey.

As Boxer is taken away in a van and the other animals say good-bye, Benjamin, the donkey that can read and think critically, sees what’s painted on the vehicle and shouts, “Fools! Do you not see what is written on the side of the van?” He reads out loud the horse slaughterer’s name, and the animals let out a cry of horror.

Squealer, the farm’s minister of propaganda, eventually announces that Boxer had been taken to a hospital to die peacefully and that the van had been bought by the veterinarian who hadn’t painted over it yet.

This scene encapsulates the importance of reading comprehension: Reading well and reasoning well go hand in hand. The animals that couldn’t read took at face value what the pigs told them. They were easily manipulated and controlled even after they knew the truth.

Taking it a step further, we can conclude that when we can’t read, we can’t empathize with others, which can easily lead to violence if we're in a crowd that has been manipulated.

Sadly, the Organisation for Economic Co-operation and Development (OECD) found that just 2% of readers across the developed world have a reading comprehension level high enough to “integrate information across multiple dense texts; construct syntheses of similar and contrasting ideas or points of view; or evaluate evidence-based arguments.”

This top group can think logically, conceptualize models of ideas, and evaluate the reliability of evidence and sources. So if you’re reading this, you’re part of the 2%.

And Stanford recently found the pandemic has stalled these successful skills in U.S. children, causing reading fluency in second- and third-graders to lag 30% behind where it should be...

Results from a reading assessment given to first- through fourth-graders nationwide show that the students’ development of oral reading fluency — the ability to quickly and accurately read aloud — largely stopped in Spring 2020 after the abrupt school closures brought on by COVID-19.

But hey, Amazon’s book sales are up, representing about 10% of the company’s revenues, or $3.8 billion last year. That’s roughly equal to the second round of stimulus checks. Maybe Amazon should be giving some of that money back to the world, actually improving it instead of frivolously throwing money into outer space.

I’ve personally been listening to the radio and podcasts more. On the way to work last week, I heard a story on WYPR that blew my mind...

It centered on Alden Global Capital, a so-called vulture hedge fund that circles dying businesses, only to buy them up, gut them, and use the extra revenue for other investments. It’s a vicious cycle that’s harmed the newspaper industry.

Alden has busily bought up local newspapers, sold the buildings, and cut staff, resulting in poor reporting, which results in more layoffs. This causes extreme distrust in the media and a lack of checks and balances in cities where corruption reigns.

The Atlantic found that in the company’s legal filings, “Alden has acknowledged diverting hundreds of millions of dollars from its newspapers into risky bets on commercial real estate, a bankrupt pharmacy chain, and Greek debt bonds.”

This story hits close to home here in Baltimore because Alden acquired Tribune Publishing in early 2021. The company now owns more than 200 newspapers, including our very own Baltimore Sun.

If that weren’t bad enough, The Atlantic followed the money and found that Alden financed the takeover of the Tribune with Cerberus, a private equity firm that owned the security company charged with training the Saudi operatives who murdered journalist Jamal Khasoggi.

Following the money can be a dirty job...

The October bull market’s in full swing. I’ve been pounding the table about this for the last few months. As of this writing, Bitcoin is up 41%, Ethereum is up 23%, and the meme coin Shiba Inu is up 250%.

One catalyst for Bitcoin reaching its all-time high of $66,000 was the launch Tuesday of the first Bitcoin futures exchange-traded fund (ETF), the ProShares Bitcoin Strategy ETF (NYSE: BITO).

But if you’ve been following me for any length of time, you should have nice stakes in the Grayscale Bitcoin Trust (OTC: GBTC) and Grayscale Ethereum Trust (OTC: ETHE). Since my first mention of them, they’re up 78% and 85%, respectively.

And Coinbase (NASDAQ: COIN) moved up on news of NBA and Facebook partnerships, as well as a direct deposit option for workers to get paid in crypto.

If you’ve got the crypto bug and want access to the next generation of cryptocurrencies set to soar in the very near future, this timely report from our crypto expert Christian DeHaemer explains everything you need to know.

His picks are moving fast, so you’ll want to jump in while there’s still time.