In 2018, China launched a secret project with the goal of eradicating U.S. submarines.

It's called Project Guanlan, which means "Watching the Big Waves," and it's a space-based laser weapon.

If you're a regular reader, then this won't come as a surprise to you.

Just last week I talked about China's latest laser assault on U.S. forces in the Pacific — an incident on February 17 in which a Chinese destroyer fired laser weapons at an American surveillance plane.

Again, we're talking about a space weapon that's capable of shooting lasers more than 500 meters (1,640 feet) into the ocean.

That's more than twice as far as sunlight goes and far deeper than previous attempts by the United States and Russia. 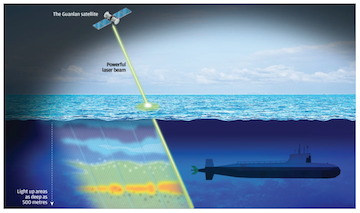 To accomplish this, the weapon uses high-powered laser beam pulses of varying frequencies, or colors. Those laser beams can scan an area as wide as 62 miles, or concentrate on one spot just half a mile wide.

The laser is coupled with a microwave radar, which detects even the tiniest disturbance on the ocean's surface, helping to guide the beam.

This makes the top layer of the ocean effectively transparent.

Chinese scientists have made another breakthrough discovery, too. This one lets them amplify the power of laser beams, making them far more powerful than anything we've seen before.

These scientists have synthesized a non-linear crystal called caesium bismuth germanate (CBGO). These crystals are inorganic, which means they can't be found in nature; they're made in a lab.

And when you shine a laser through them, they magnify its energy by 13 times.

Paired together, these laser technologies are an absolute nightmare for the U.S. military.

They have the capability to essentially neutralize not just our submarines, but all of our ships, tanks, and fighter jets.

There's really no answer for it.

The Pentagon is very aware of the rising threat posed by China's laser technology, and it's racing to catch up. That's why laser projects have seen an “explosive spike” in DoD funding.

“Robust federal investments in directed energy is absolutely critical to our national security,” Rep. Tim Ryan, D-Ohio, said at a recent directed-energy summit. “No one can sit in classified briefings as I have and learn what our adversaries are doing right now and not feel a keen sense of urgency to invest more into these technologies.” 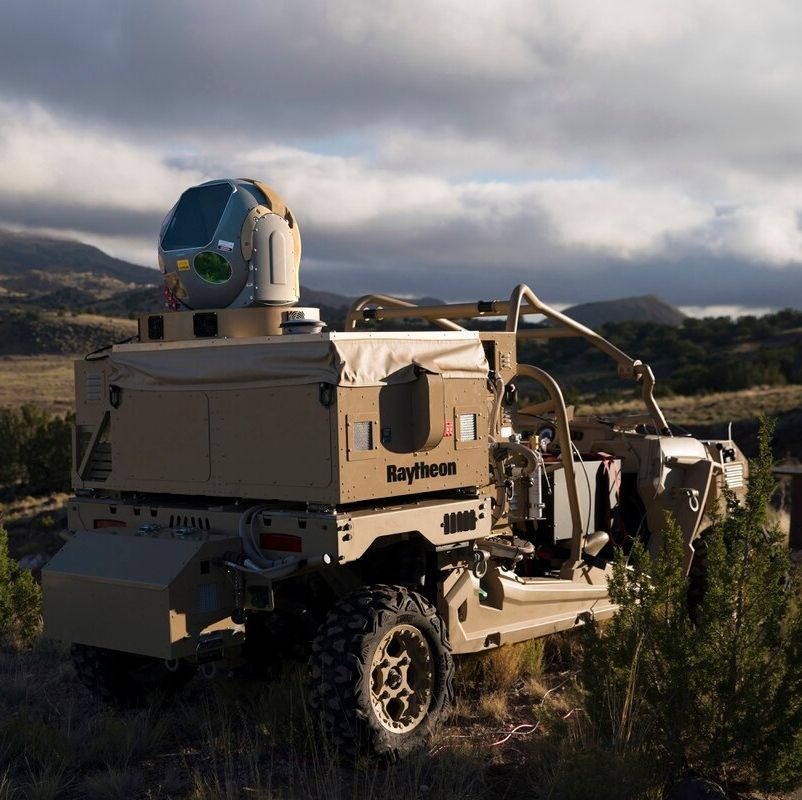 The progress has been self-evident.

The HELWS, or High-Energy Laser Weapon System, is mounted on a Polaris MRZR all-terrain vehicle, while PHASER and THOR are transported in shipping containers.

All three are capable of shooting down swarms of enemy drones should they approach.

That's a good step forward, and it shows the kind of capability laser weapons bring to bear. But again, China is aiming higher, and it's bragging about it.

In March, an article appeared in the Global Times — an official mouthpiece of China's communist party — asserting that lasers and other directed-energy weapons ought to be used to force the U.S. Navy out of the South China Sea.

"Chinese military experts on Tuesday suggested the use of non-lethal electromagnetic weapons, including low-energy laser devices, in expelling US warships that have been repeatedly intruding into the South China Sea in the past week," the article read.

Furthermore, the "experts" were two high-ranking members of the People's Liberation Army.

"The use of electromagnetic weapons, including low-energy laser devices, could be viable, as they can temporarily paralyze US ships' weapon and control systems without visible conflict but can send a strong warning," they said.

That this article came only a month after the February 17 incident is no coincidence.

China is sending a clear message that it's developed a new counter to the U.S. naval presence in the Pacific.

And that emerging threat warrants a serious response from the U.S.

That's why more than $300 million is being poured into laser weapon development with more to come.

And it's why I've isolated a huge potential profit play to take advantage of that trend.

You see, I've found the only firm in the Western world capable of competing with China's technological advantages.

And I've just released a full report on it that you can access here.

Give it a look if you want to understand the full scope of emerging laser weapons technology.