Everything is so right in the world…

That the Fed just cut interest rates again today. It’s the only major central bank with any wiggle room to do so. A year ago, things were so good they were predicting rate increases.

They're so right that the European Central Bank already has rates in negative territory and cut further to -0.5% while reinstating its bond purchasing program last week. It admitted it can’t do much more and that individual countries would need to start doing things themselves. And we all know how strong the individual European countries are.

Things are so right in the world the Saudi and American governments are still busy trying to frame someone for whatever happened to the Saudi oil infrastructure over the weekend. Houthis… no, no, Iraq… no, no, Iran sent missiles through Iraq. It was drones… no missiles. Maybe it was sharks with lasers?

Nothing like a good ol’ war when all other stimulus fails.

Maybe another journalist will be bonesawed by our allies. Maybe they’ll hire the same people they used to kill Epstein.

Things are so good out there Apple has started draining my battery this week. Notice your battery draining a little faster, too? Better go buy that new iPhone lest Apple’s market cap remain under a trillion dollars. And then we’d really have problems.

Things are so good out there the market hailed WeWork as a novel idea, like people haven’t been buying property and renting it out for centuries. It’s the Uber of rental, man. Great, how much money has Uber made?

Everything is so great Ford was just downgraded to junk.

Everything is so right out there we’re gonna let the Sackler family get away with it by hiding funds and declaring bankruptcy.

Same as we do with bankers who are caught illegally rigging markets, like LIBOR, or the rigged-market-du jour: precious metals.

Things are so good Trump is looking like an easy two-termer.

Things are so good that gold — the ultimate safe haven — is at six-year highs. 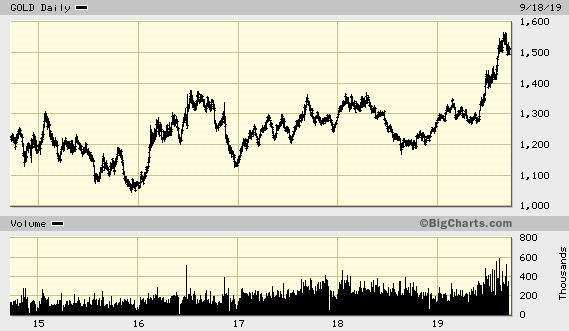 My advice is to own quality gold stocks now.

Big Bankers Face Mobster Charges
It feels good to see these crooks called out, and quite loudly in public. Shame is something missing these days. Even if these traders don't feel it, at least it is finally being heaped on them.
Central Bank Musical Chairs Continues…. Until It Can’t
Gold moved up too quickly too soon. We are in the midst of a pullback that will give gold the energy needed to go even higher on the next run. That doesn’t mean the central banks won’t do everything in their power to make sure monetary policy is as accommodative as possible...
Did You Forget About the Shoeshine Boy?
History, as they say, has a way of repeating itself. The current gold market reminds Outsider Club contributor Ryan Stancil of a conversation he had with his tailor in 2017 about bitcoin...
Investing in Marijuana Without Getting Burned
The marijuana industry has rewarded scores of investors with life-changing gains.