Medical science is growing by leaps and bounds... and sometimes blurs the line between science and science fiction.

It can be tough to stay on top of all the latest advances, but it's in your best interest.

Because the improvements being made to medical technology — coupled with a huge baby boomer population and everyone living longer than ever — is driving massive profits from related stocks.

The Dow is setting records, up 20% over the past year. But the iShares Nasdaq Biotechnology (NASDAQ: IBB) ETF has delivered nearly 50% upside in the same time.

Those outfits are currently leaders in biotechnology, developing medicines, vaccines, and therapies for cancers, infections, and autoimmune diseases at the molecular level.

But there are a host of small biotech firms and universities out there pioneering their own cures, and you have to keep an eye on these as well, as they will soon sell to or be bought by the bigger players.

Can You Hear Me Now?

I recently read that researchers at Oregon Health and Science University found a way to turn ordinary skin cells from your body in embryonic stem cells.

That means they can take cells from your skin and turn them into heart, nerve, muscle, bone or other types of cells that are genetically identical to you. You could get new nerve cells if you have spinal cord damage, or new heart cells to repair damage after a heart attack.

Ultimately, they could use the cells to create another you. 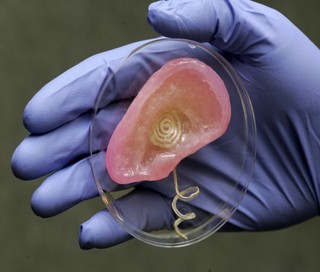 Princeton is going farther, using a 3D printer to create a bionic ear from cells and hydrogel that can hear better than any human's.

According to the journal Nano Letters:

This field has the potential to generate customized replacement parts for the human body, or even create organs containing capabilities beyond what human biology ordinarily provides.

It mentioned controlling your bionic ear with your cell phone, turning the volume up or down at will.

That will perfectly compliment the music you'll soon be able to store in your DNA. The European Bioinformatics Institute has already stored nearly 740 kilobytes of data in DNA, the same way it stores genetic information.

Another company I follow has actually created functional human tissues with a 3D printer. It recently unveiled an entire human liver that has excellent function. And it came out of a printer. That stock is up 30% on the news, and has hundreds more to go...

But the most incredible medical advancement I've seen lately stems not from body part or pill, but rather from the blood of mollusk called the Keyhole Limpet. 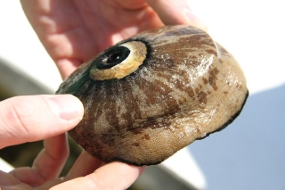 Its blood stimulates the human immune system, and a number of drug companies — including Amgen, Pfizer, GlaxoSmithKline, and more — are developing drugs that need this blood as an ingredient.

The drug company makes the vaccine, and this blood tells the body to attack the cancer, infectious disease, or autoimmune disease cells the vaccine targets.

We're on the verge of vaccines or cures for some of the world's most terrible diseases. And many of them need the blood of this one sea mollusk.

But that's not the best part...

This mollusk only lives in one part of the world, and there aren't many of them left. After you extract their blood, they die. As a result, this creature's blood sells for between $30,000 and $900,000 per gram.

One company has pioneered a way to grow these things on land. And they patented a procedure for extracting the blood without killing them.

It's only a $30 million market cap company now, but it's projecting billions in annual revenues. It's already partnered with seven of the largest pharmaceutical companies on the planet.

I recently went to tour their facilities, and I believe this stock offers a true shot at hundreds of times your money.

Full details will be available to you in a few weeks...