Bet on the Horse, Not the Jockey

I went to my first proper music festival in 2006 at Pimlico Race Course in Baltimore, Maryland.

It remains to this day the greatest live music event I’ve ever seen, and I don’t think anything will ever match it.

Just look at that lineup!

My best friend picked me up from college and we made the two-hour journey to Baltimore. As we stood in the long line, we noticed an opening through a gate that would take us around the front. Not sure how no one noticed us, but we hopped the barricade and cut the line.

Once the big gates opened to the field, we bum-rushed the main stage and planted ourselves front-row center for some of the greatest bands of our generation. Gnarls Barkley had just released “Crazy,” which went on to top the charts around the world. He and his band came out in full shiny Roman regalia and opened with “We Are the Champions” by Queen. Jack White’s band, the Raconteurs, had just released “Steady as She Goes,” another chart-topper. The place erupted when he walked on stage, and they all but blew my eardrums out. No cell phones, no Instagram selfies, just no-nonsense rock-and-roll.

Needless to say, Pimlico created fond memories for me.

Some places just emanate magic, and Pimlico has a habit of creating memories that last a lifetime.

People have come from all over the world to experience Pimlico since its creation in 1870, and it’s remained a beacon of light through countless setbacks for the city of Baltimore, including the Great Fire, the Great Depression, the riots, and lack of upkeep.

The Maryland Senate did recently approve $375 million in funding for much-needed racetrack upgrades, with a concept design pictured below. 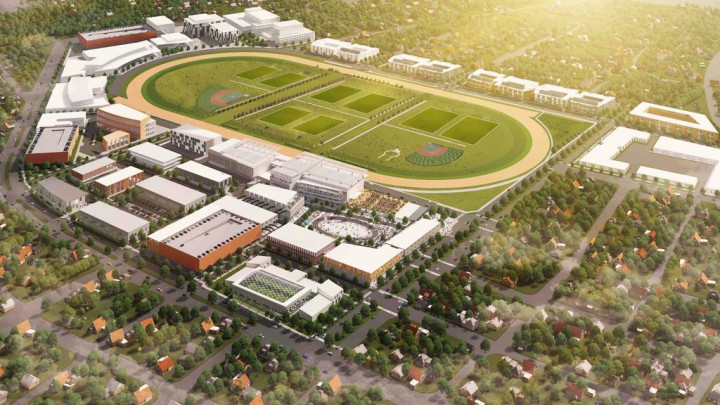 On November 1, 1938, Pimlico famously hosted the Pimlico Special, where the underdog Seabiscuit defeated Triple-Crown winner War Admiral, which gave hope to an entire nation when it needed it most. An estimated 40 million people listened to the event on the radio.

During the Great Depression, when worldwide GDP fell 15%, international trade fell by 50%, and unemployment rose to 23%, the U.S. in particular needed a hero.

Seabiscuit wasn’t your typical race horse. He was small in stature, but when he was just 2 years old, he won five races and placed second in seven. After that, with only four wins out of 12 starts, Seabiscuit had fallen out of favor with his owner. Rich car salesman Charles Howard bought him, and along with trainer Tom Smith, the two would go on to see Seabiscuit’s rise to stardom.

The Match of the Century

Now, for much of the horse’s career, Seabiscuit was paired with jockey Red Pollard, and the two won important races in 1936 and 1937. But Pollard suffered crippling injuries as a jockey. He was blind in his right eye from an early riding accident, which he kept a secret for fear of losing his job.

And just as Seabiscuit was reaching the pinnacle of his career, a horse fell on top of Pollard, caving in his chest and breaking multiple ribs. He was replaced by jockey George Woolf until he could ride again.

After recovering and just before a head-to-head match with the favored War Admiral, Pollard was training another horse when it got spooked, threw him, and nearly sheared his leg off below the knee. The injury wouldn’t heal in time for the big race, called the “Match of the Century” in the media. 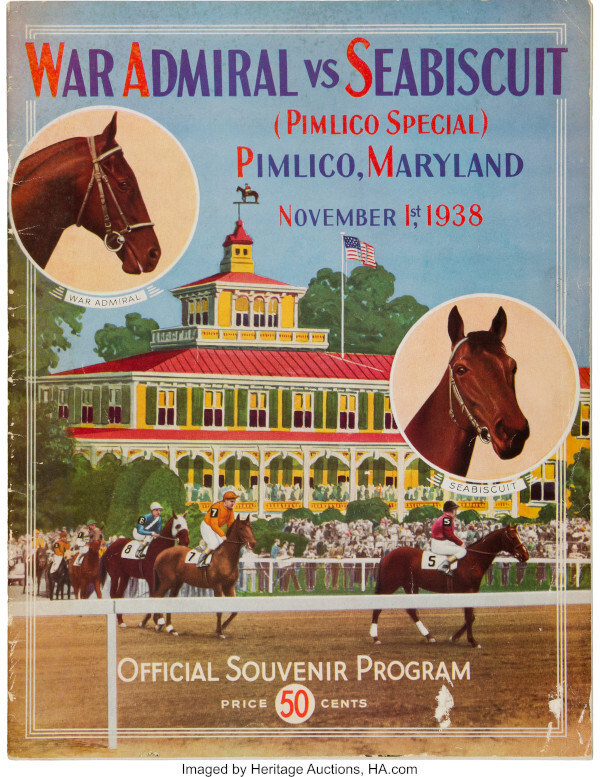 Jockey Charles Kurtsinger stepped in to ride Seabiscuit at the Pimlico Special. If you haven’t watched the race, I suggest checking it out on YouTube.

It’s a wonderfully inspiring story, and I don’t want to take anything away from the jockeys because it takes an incredible amount of skill, but there’s a reason the hero status is always placed on the horse, not the jockey.

Bet on the Horse

Jockeys typically don’t become household names. Even though they’re essential to the game, as we saw with Seabiscuit, another one can step in and do the job. If the horse is good enough, it may not matter who’s riding on top after all.

The same goes for Wall Street, where the jockey may change, but the horse remains the same.

In the stock market, investors have a bad habit of pinning financial success on hedge fund managers who ride the Wall Street horse to try and win a race that doesn’t exist. These fund managers often take on rockstar status and become household names, famed for their prodigious stock-picking abilities. The Main Street chumps see these funds rising and they get FOMO. So they buy in and bid up stock prices. But it rarely ends well...

As Burton Malkiel explains in A Random Walk Down Wall Street, investment fund managers pop up in the public eye, espousing their latest investment vehicles that will “outperform the market.” People think, “They’re uber-wealthy, so they must know how to beat the indexes, right?” Think again.

Malkiel shows that time and time again, fund managers cannot time the market. They may outperform in the short term because of hype and fanfare, but their funds always come back down to Earth. The public gets starstruck and decides that it’s fashionable, in Malkiel’s words, “to bet on the jockey rather than the horse.” 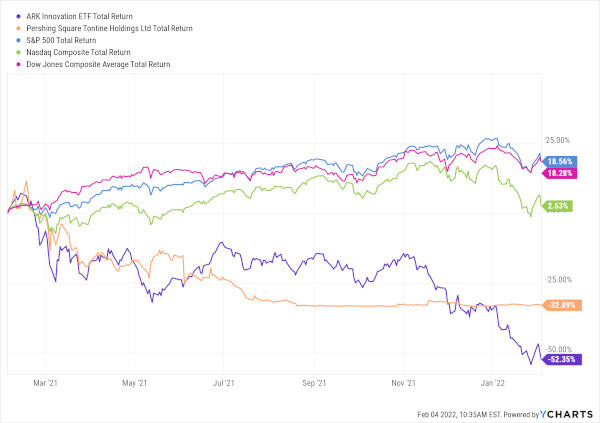 ARK is down more than 50%, with Pershing Square down nearly 33%! I wouldn’t want my money in those funds.

Now, the stock market isn’t a horse race, even though it may feel like it from time to time. But if you'll let me continue with the analogy, make sure you bet on the horse because the jockeys get trampled. Slow-and-steady indexing always wins the race.

One more takeaway is that you can determine market sentiment in a sector through fund managers’ portfolios, as the performance of their specialized stock pics tend to reflect and exaggerate current market behavior.

There was heavy cluster buying at Intel (NASDAQ: INTC) to end the year, with CEO Bob Swan buying more than $2 million worth of shares. The CFO and multiple directors also purchased stock at an average price of $50. Intel's a huge supplier of chips to China, and it was slated as one of the biggest sponsors at this year's Olympics in Beijing. But Intel's holding firm that it doesn't support the reported human rights violations by the communist country. So even though the company pulled out from a massive advertising opportunity, it's betting it will gain more publicity and respect, leading to better customers. I'd feel comfortable purchasing anywhere below $47.73.