Are We About to See a MAJOR Correction?

A few weeks ago I wrote about the Fed and interest rates.

My thesis was that the Fed wouldn't undermine the economic recovery it's sowed over the past two years by overcorrecting for inflation.

But some of the rhetoric I've seen these past few weeks has me second-guessing that position.

The labor market is very strong, and inflation is much too high... If we conclude that it is appropriate to move more aggressively by raising the federal funds rate by more than 25 basis points at a meeting or meetings, we will do so. And if we determine that we need to tighten beyond common measures of neutral and into a more restrictive stance, we will do that as well.

And on top of that, Lael Brainard, a member of the Fed's Board of Governors, says that in addition to half-a-point hikes, the Fed's bond holdings will “shrink considerably more rapidly” over “a much shorter period" than the last time it reduced its balance sheet.

Other Fed members have made it clear that they've grown more hawkish, as well.

Now, don't get me wrong, I normally don't believe the rhetoric. I'm a data guy.

I try to ignore what people like Brainard and Powell say and look at the facts on the ground. But I think a flaw in that philosophy is that it presumes people in positions of power do the same, when we all know they don't.

Case in point: I spent two years screaming about inflation only to have Jerome Powell and Joe Biden deny its plain existence. So I guess it makes sense that now that I think inflation is peaking, and that the Fed should tighten monetary policy in a measured fashion, the political brain trust in charge of our country wants to go pedal-to-the-metal with interest rate hikes.

Well, OK then. I guess I have to take them at their word. In which case, things are about to get ugly.

Stocks across the board could be in for a steep correction — though I think tech stocks will fare better, since they were oversold to start the year. In fact, on a price-to-earnings basis, tech stocks are the cheapest they’ve been since the pandemic hit in March 2020.

Could they fall further? Yes. But the floor is probably lower for the rest of the market — especially in the sectors that have outperformed these past few years, like housing and autos.

If you look around, you can see the canaries in those coal mines already starting to die.

New-vehicle sales in the U.S. fell about 12% in the first quarter compared with a year ago.

General Motors reported Friday that its sales were down 20% for the quarter, while Toyota sales were off 15%. Stellantis sales were down 14%, while Nissan was off almost 30%. Honda reported a 23% decline, and Hyundai sales fell just 4% from January through March.

A lot of these companies tried to pin those declines on chip shortages, but the real problem is that prices have gotten too high for consumers to stomach.

The average sale price of a new car hit a record $44,129 for the quarter, according to J.D. Power.

Of course, prices are high in part because of supply shortages, but like I said a few weeks ago, the Fed isn't going to solve that problem by tightening its policy. So prices will remain high, but interest rates on car loans will shoot even higher, making the appeal of a big-ticket purchase far less palatable to consumers.

Housing, meanwhile, is going to have the exact same problem.

There, prices are high largely because inventory is so low. There just aren't enough houses to go around. And once again, the Fed isn't going to change that by tightening monetary policy.

What tighter monetary policy will do is drive mortgage rates through the proverbial roof.

That process has already begun.

Freddie Mac reported yesterday that the average rate on a 30-year fixed-rate mortgage rose to 4.72% for the week ending April 7, the highest it's been in nearly four years.

It's the sixth-straight week in which mortgage rates have climbed. And they're up 1.5% over the past three months — the fastest three-month surge in rates since 1994.

“The increase in mortgage rates has softened purchase activity such that the monthly payment for those looking to buy a home has risen by at least 20% from a year ago,” Freddie Mac chief economist Sam Khater noted in the report.

That monthly mortgage payment is a key metric. Remember, it was one thing for home prices to be at historic highs when interest rates were low, but now rising rates are compounding that cost.

So much so that the average monthly payment is now significantly higher than it was even prior to the Great Financial Crisis of 2008. 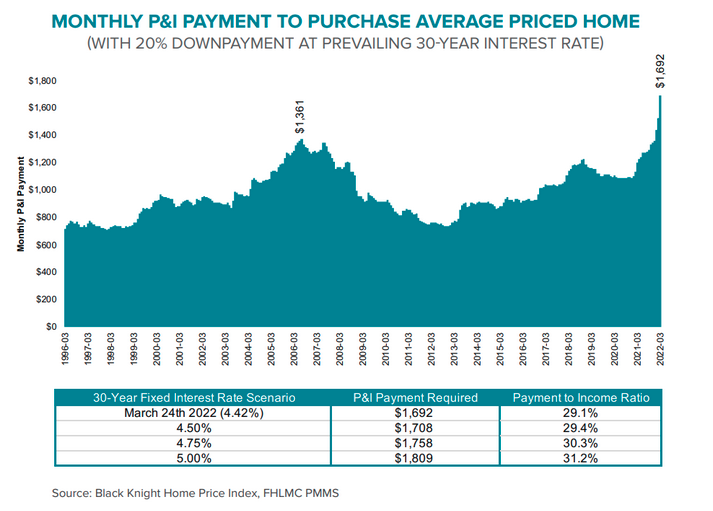 And because wage gains are no longer keeping pace with the rising prices, mortgage payments as a percentage of income are rising, too, also to a point not seen since the pre-crisis frenzy. 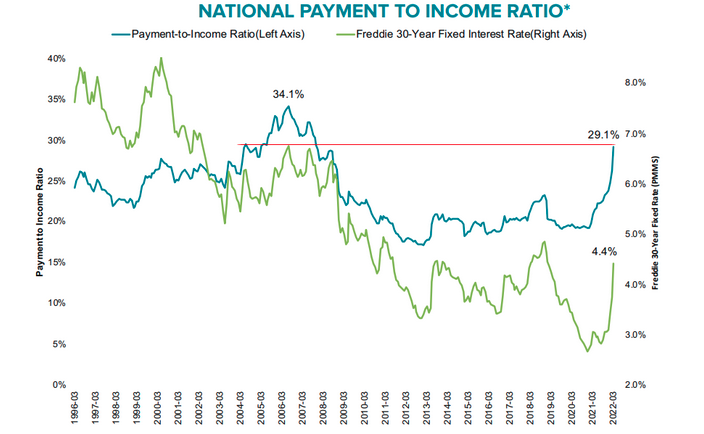 “The bottom line is that mortgage rates are on course to surpass 5%, a level not seen since February 2011, when the typical home in the U.S. was priced at just $166,000 — less than half the price of today’s typical home,” George Ratiu, manager of economic research at Realtor.com told MarketWatch. “For many American families, today’s mortgage rates are closing the door on being able to afford to buy a home this spring.”

This spring, George? This trend could worsen throughout the year.

It just depends on how aggressive the Fed chooses to be.

But the correction will come, and home prices will fall. Thus home equity will fall. Consumer confidence will fall. Lending will fall.

And that's when we'll see the big market exodus.

That's why I'm holding out hope that the FOMC is full of hot air — that it's just trying to convey that it understands the seriousness of the inflation problem. Or at least that it'll flip-flop again when it's confronted with the actual consequences of these rate hikes. Just like it was with inflation.

Really, if it thinks the outcry over higher prices has been bad, wait until it sees how pissed people get when they lose their jobs.