The Wall Street Journal did not mince words earlier this year when it ran an essay with the title Only Nuclear Energy Can Save the Planet.

The message was clear: Do the math on replacing fossil fuels. To move fast enough, the world needs to build lots of reactors.

I’ve been saying this for years, telling anyone who’d listen that nuclear energy is the cleanest, safest form of baseload electricity the world has ever seen.

And as the world wakes up to that fact — and make no mistake, it’s a mathematical fact — uranium investors are going to make lots of money.

That’s because, right now, uranium prices are so low that no company can make money mining it.

But as the coming wave of nuclear expansion unfolds, the price is going to have to rise many times over to stimulate the necessary production.

Don’t take it from me. Just look at France, which last week announced it will simply be unable to reduce its use of nuclear energy for at least the next decade if it wants to meet its climate goals.

Solar and wind mathematically could not make up the difference fast enough in France, and that is true all over the world. 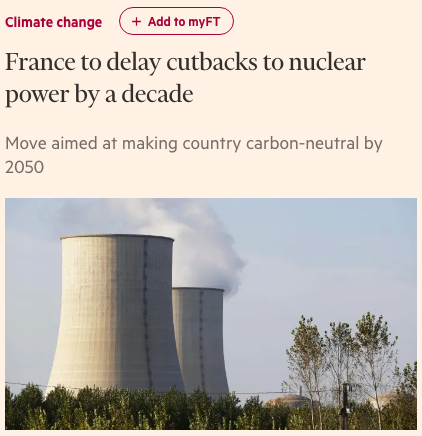 It’s pretty simple to understand. Here’s how the Financial Times put it:

France will delay by 10 years the shutdown of part of its nuclear power industry in order to fulfill President Emmanuel Macron’s aim of making the country carbon-neutral by 2050.

He is currently reviewing a Department of Commerce report about securing America’s supply of uranium. And I expect him to make a special uranium announcement by July 14th.

There are 100 nuclear reactors in the U.S., but we only produce enough uranium to supply one.

One in five American homes relies on nuclear for electricity. Two-thirds of our clean energy consumption is nuclear. 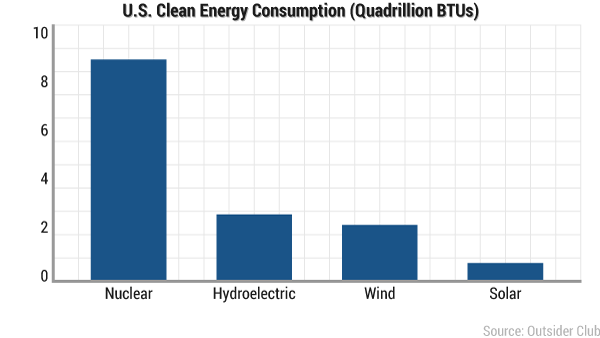 Uranium production in the U.S. is currently near a 70-year low, yet it’s the largest nuclear nation, leaving it reliant on foreign imports for more than 95% of its uranium needs.

In 1980, our uranium was 100% made in America. Now we produce less than 5% of what we need, with many of our imports coming from Russia and Russia-controlled nations. 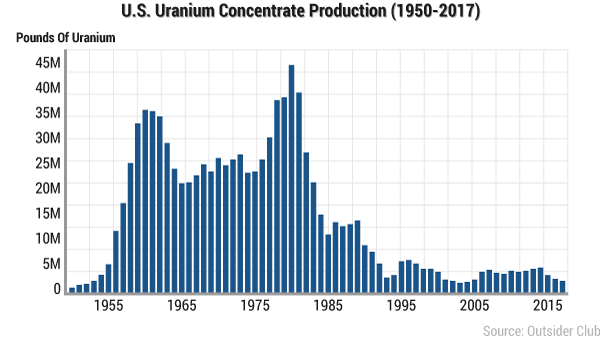 Trump is likely going to change this by implementing either a tariff or a production quota which he can do through something called a Section 232 mandate.

When he does, I expect a few select American uranium stocks to rally hard and fast. Some of them have already been creeping up in anticipation.

Because in order for them to ramp up production, the price of uranium needs to be several times higher than what it currently is.

And if you know anything about uranium stocks, you know that when the uranium price ticks up just a little bit… uranium stocks go up a lotta bit (a technical term). I explain all this in a new report here.

Per Commerce Department rules, we know that Trump has until July 14th to make a decision on how to handle American uranium supply.

I have made three uranium stock recommendations ahead of this date.

You can get my full rationale and details on them here.

Bill Gates: “I can't overstate how important this is.”
Nuclear energy is that important to our future. It's about to get the boost it deserves. If you think we still run on the anachronistic power plants from nearly 50 years ago, think again...
By JULY 14: Trump’s “232 Mandate” Will Go Public...
Trump's "232 Mandate" will go public on July 14th, igniting the next energy supercycle. Outsider Club founder Nick Hodge discloses how investors can prepare for this unique opportunity...
Big Tech's Secret Commodity Demand
The market’s favorite company it loves to hate, Tesla, is sounding the alarm as it recently warned that it is preparing for global shortages of these metals. Outsider Club editor Gerardo Del Real discusses the implications of Tesla's announcement...
Heal Your Ailing Portfolio Body