Another Market Bubble In Housing?

According to the economic numbers that continue to roll out – including recently released numbers on home sales – the U.S. economy continues its steady rise and return back to health.

Sales of previously existing homes in May are now at their highest level in more than three years, Bloomberg reports. This has also been partly responsible for driving home prices back up to a level not seen since just before the mortgage bubble of 2008. 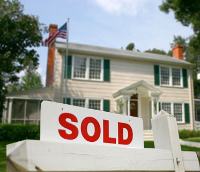 So what is actually rising? Home purchases, for starters. The National Association of Realtors (NAR) said this number increased 4.2 percent, rising to a 5.18 annualized rate. This is the most since November 2009.

Better still, at least from the perspective of the NAR, these increases are very broadly based, covering all four regions of the U.S. The Midwest saw the largest increase of 8 percent, and the South had a 4 percent increase.

Home prices are also increasing, according to the report. The median prices of an existing home rose 15.4 percent from last year. With the current median home price sitting at $208,000, this represents the highest number since July 2008, just before the crash in the housing market. From a monthly perspective, this is also the largest jump since October 2005.

Certainly rising home prices are a positive sign for the economy, right? Given the fact that credit is significantly more difficult to come by these days, the news does have a positive aspect to it. A growing percentage of home sales, especially existing home sales, are being conducted as all-cash transactions.

Additionally, the fact that people are continuing to buy shows an increase in consumer confidence, something some Federal Reserve members have been using to argue their position of tapering the pumping of easy money into the economy.

These numbers were indeed impressive, exceeding the expectations of most analysts. With interest rates still low, they did expect to see some increases in many of these numbers, but the magnitude of these gains has been surprising. The initial prediction was only for “moderate” home price growth. With a 15 percent increase over last year, this is clearly more substantial than “moderate.”

Lawrence Yun, chief economist for the NAR, seems to be concerned about these numbers. A statement from him indicated home prices are growing “too fast.” In order to moderate this growth now and in the future, the country will need to see additional home building. In fact, he also stated that there should be as much as a 50 percent increase in new home building.

This means that we are now in a very interesting situation. The supply of housing on the market, both new and existing, is actually becoming very limited. While the total available inventory of homes for sale did increase some 3 percent at the end of May, the overall supply level is decreasing.

The 2.22 million existing homes on the market represent a 5.1-month supply at the current pace. This is down from 5.2 months in April. A year ago, there was a 6.5-month supply, meaning current inventory levels are down 10 percent over last year. These are all trends that could be pointing to a new type of bubble growing in the housing market.

The major concern is that home prices will end up growing too fast. The pace right now may lead to a situation where there is actually a home shortage, driving prices up even faster.

While this would turn the market into a major benefit for sellers, with higher and higher prices, it is not good for the overall economy. The threat is, once again, that desperate people will end up buying too much home and then defaulting on mortgages or over-spending on the house, which will put a dent in other areas of spending, causing the economy to contract once again.

Price levels are high again. This fact is undeniable. These pricing levels were last seen right before the housing bubble burst. Strangely enough, though, many analysts see the drop in foreclosures as a key driver of home price increases.

Distressed sales represented 18 percent of the market in May. This is the same level as April, and it represents a significant decline from a year ago when nearly a quarter of all sales fell into this category. With a continued decline in these distressed sales, it is also quite likely that the prices of homes will continue to rise.

While the previous boom and bust in the housing market was fueled by easy credit and overbuilding, the current situation is a lot different. Interest rates have increased off their lows, but the cost of credit is still very cheap. Of course, it is much more difficult to get loans these days.

These rates are primarily responsible for attracting buyers back into this market. In fact, buyers are coming back in at a much faster rate than sellers are putting homes on the market. The NAR report also states buyer traffic is 29 percent above last year. Sadly, the supply of homes is down approximately 10 percent.

As with any other aspect of the economy, new numbers that indicate difficulties for some may also spell opportunity for others. Such is the case of home builders. These companies are now in a unique position where they can increase the prices of existing homes and lots. This will also continue to contribute to the increases in home prices, at least for the short term.

Other companies set to do well in this type of economic environment include home improvement product makers, other builders, real estate brokers, and mortgage lenders. Building products and materials are seeing big increases in demand with inventories being very low.

This all would seem to indicate that strengthening prices are good for these types of businesses, even if it does come at the expense of the typical home buyer.

One of the most interesting things to note about the rise in home prices and the shrinking of home inventory is that this may have been largely caused by institutional money. It should be no surprise to regular readers that large investment firms have been aggressively buying homes and other properties in some of the most depressed markets throughout the country.

Now, whether this is indeed because these firms smelled a big opportunity or whether this was all orchestrated to allow the Fed to show “hard” evidence that the economy is on the mend, I cannot say for sure.

The issue is when this happens, the average home buyer is actually squeezed out of the equation.

This is what is happening today. Blackstone (NYSE: BX), for example, owns 26,000 homes in nine states, and Colony Capital, a Los Angeles investment firm, owns 10,000 properties (and is currently spending about $250 million per month).

Eventually, these players are going to start selling in an effort to get a return out of their 'investments.' This could mean a huge drop in prices and a glut of newly available properties on the market.

This could end up in a very similar situation to the previous bubble. The difference, of course, would be that it was not the average home buyer who suffered from mortgage defaults.

Actually, if these big firms end up defaulting on their loans, it could be even worse to the economic infrastructure of this country. Can anyone say, “too big to fail,” again?

How to 'Print' Your Own Dinner
Ready to print your very own steak? 3D printing has now entered the world of science fiction...
The Building of the Biotech Revolution
A monumental biotech revolution has a strong foundation, but needs more to continue to expand... Take a look at biotech's cornerstone and a way to invest in its keystone.
They Ripped You Off
''Lord help our f--king scam... this has to be the stupidest place I have worked at,'' writes one S&P executive.
Heal Your Ailing Portfolio Body