All-Time Lows All Around Us

All-time lows and numbers never seen before continue to dot the bond landscape.

In Sweden, the 20-yr. bond just fell below 0% for the first time ever.

In Germany, the 10-yr. bond yield hit a record 0.727% as the ECB announced that it has — get this — a big bazooka of stimulus ready for September.

As top official and Governor of Finland’s central bank Olli Rehn said, “When you’re working with financial markets, it’s often better to overshoot than undershoot, and better to have a very strong package of policy measures than to tinker.”

Mr. Rehn’s words carry weight since he sits on the ECB’s rate-setting committee.

The expectation is a 0.1% point cut to the 0.4% interest rate (25%) and approximately €50 billion ($56 billion) a month of fresh bond purchases under its quantitative easing program.

Other ideas being kicked around are new long-term loans for banks with a combination of lower rates and extending the maturity on those loans.

That’s not it. There’s discussion that involves changing the rules of the bond-buying program which allows banks to buy up to 33% of the government debt of individual Eurozone members.

The ECB is also not ruling out the purchase of equities.

In simple terms this is a “throw the kitchen sink at it” approach to trying to stall the Eurozone implosion coming to a theater near you.

Meanwhile, here in the U.S., the yield curve has inverted, once again signaling the likelihood of a recession sometime in the future. When? Let’s look at history for a clue. 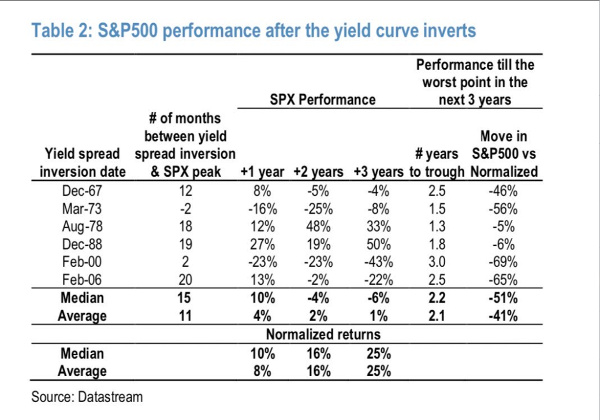 The chart shows that the median number of months between yield spread inversion and a peak in the S&P 500 index is 15 months. The average? 11 months.

Here in the U.S., Trump continues to berate Fed Chairman Jerome Powell, calling him clueless and insisting that he has let America down.

For all the dollar perma-bears out there, it's going to be a long couple of years, folks. The dollar will go the way it’s gone for the past several decades but not before other currencies.

According to Bloomberg, the dollar has gained against nearly all of its group 10 peers this year. A trade-weighted index of the greenback adjusted for inflation is close to its highest point since 2003.

It’s not just the U.S. and the Eurozone in a race to drop it like it's hot. Last week, Mexico’s five-member board voted to lower its key lending rate by 25 basis points to 8.0%, the first cut since June 2014.

This follows a $25 billion stimulus package last month meant to, you guessed it, stimulate the economy through a weak period.

Let’s look at the forest for a second. 30% of the global, liquid bond universe is being sold with a guaranteed loss. That 30% equates to nearly $17 trillion. With a T. 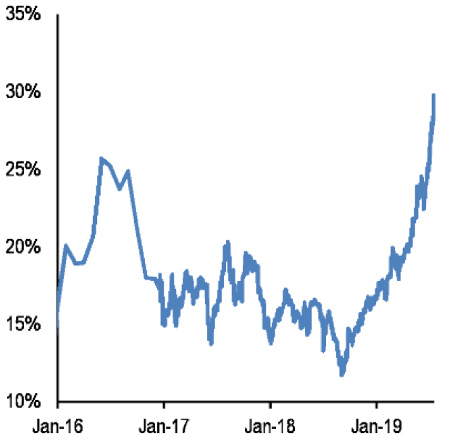 We are going through a global version of 'keep the zombies alive' with the sustenance being cheap money and a shell game of "we print money to buy our own bonds and stocks."

But don’t worry, the ECB has a bazooka ready. Here in the U.S., at least one more and likely two more rate cuts are in the cards.

Expect volatility. Expect a lower then higher gold price pushing the $1,580 mark before an ugly pullback in mid-late September that shakes out remaining weak hands.

Then expect a resumption of the most epic gold bull market many of us will ever see.

I'll be talking about this and more at the upcoming New Orleans Investment Conference in early November. I hope you can make it out to see me and Nick Hodge, among many others.

The Shift Is Underway
The great reflation begins this month with the first rate cut in a decade. Remember what happened last time? Outsider Club editor Gerardo Del Real reminds investors of what to be looking out for...
This Is What Will Trigger The Next Gold Bull Market
Outsider Club editor Gerardo Del Real tells readers why they can expect Dow 30,000, expect low interest rates, expect volatility from overseas to drive the dollar higher, and in the second half of this year expect a gold rally...
Donald Trump’s Useful Idiot
The Fed was already a shadowy cabal that acted on behalf of banking interests. But now it’s becoming something worse – a shadowy cabal that acts on behalf of political interests.
Get Into Gold Right Now
Let me be crystal clear, the time to add your favorite gold juniors is now. The bear market has done an excellent job of shining a spotlight on the better teams in the space. Here's what you're going to want to do...
Heal Your Ailing Portfolio Body