A Very Quiet (and Profitable) Revolution

What if there was a product that saw a 40% jump in demand last year?

A product that hit a record-high peak in proliferation?

A product that was useful, inexpensive, and environmentally friendly?

Would that interest you?

If it would, then I have some good news, because that’s exactly what I’m going to show you today.

Because today is the day we talk about hydrogen fuel cells — a market that has been unfairly eclipsed by the rise in battery demand we’ve seen these past few years.

Sure, electric vehicles were all the rage… for a while.

We all know that gas vehicles are outdated and expensive. The world is moving in a different direction. More and more we’re relying on batteries to power our smartphones, computers, even our homes, and especially our vehicles.

But that was the 2010s. We’re in the 2020s now. And that means we’re moving forward even faster to a new, better way of powering cars and trucks.

No doubt, batteries will still be relied upon to power our technology and store renewable energy. But when it comes to the auto market, hydrogen has the advantage.

For one thing, there are no costly input materials like lithium or rare earth metals. Hydrogen fuel cells instead rely on the world’s most abundant element.

And unlike batteries, hydrogen fuel cells don’t degrade with each charging cycle.

That’s a huge problem with batteries.

Anyone who’s had their iPhone slow down and lose function due to the decaying battery within can tell you that.

Well, that’s not a problem for hydrogen fuel cells.

And what’s more is that fuel cells don’t need to recharge, either. As long as there’s hydrogen in the tank, your car “recharges” as you drive. And it only takes five minutes to refill your tank.

That way you’re not sitting around at a charging station.

Given those advantages, it’s easy to understand the rising demand for this technology.

Companies delivered about 1,100 megawatts of hydrogen fuel cells in 2019, up roughly 40% from 806 megawatts in 2018, according to a report from energy consultant E4tech.

And the hydrogen fuel cell sector as a whole added more than 1GW of new capacity for the first time ever last year.

Daimler, the world's largest truck manufacturer, could commercialize a hydrogen-powered city bus in the next two to three years. It’s been testing them since 2003, and the company began deliveries of the Mercedes-Benz GLC F-Cell crossover in Europe in 2018.

This revolution isn’t confined to roads, either.

The first zero-emission “hydrail” project in the U.S. will be in southern California, where the San Bernardino County Transportation Authority plans to operate a FLIRT H2 train from Swiss supplier Stadler in 2024.

The first train, with two cars and a rooftop power pack containing fuel cells and hydrogen tanks, will run on a nine-mile commuter rail line between San Bernardino and Redlands, under a contract worth $23.5 million, with an option to purchase four more trains.

And French industrial conglomerate Alstom already has hydrogen-powered Coradia iLint trains running in Germany on a commuter rail line, with more headed to France and the U.K.

China saw the first fuel cell tram go into operation in 2015 and Beijing is rapidly increasing its efforts to promote the new technology.

Once that happened, the floodgates flew open. 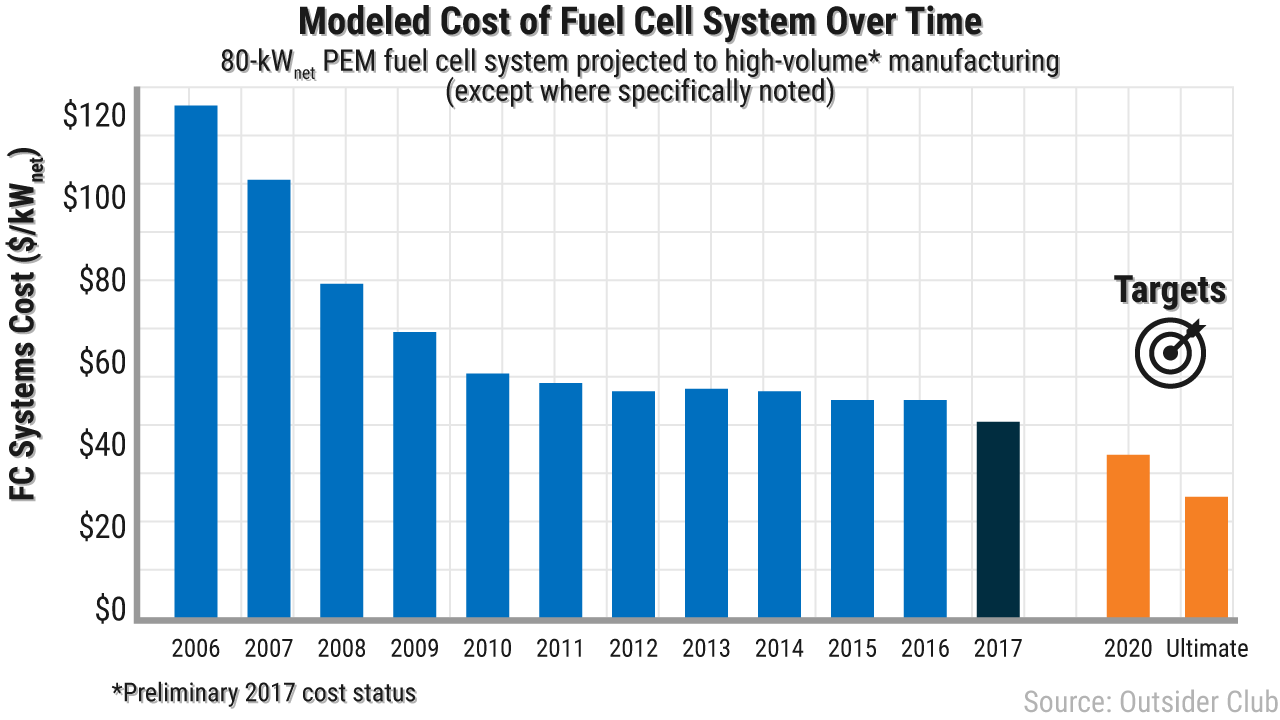 The cost of hydrogen fuel cells plunged by two-thirds from 2006 to 2017, and it's going to slide even further, as economies of scale kick in and technology improves.

This trend will boost demand even further.

That’s why now is exactly the right time for investors to climb aboard this trend.

The technology has finally arrived but the market is still nascent.

There’s nothing but room for growth and limitless potential.

So if you want to know how to profit, check out Jimmy Mengel’s latest report on fuel cell technology.

He flew all the way out to California to get a firsthand look for himself. And he’s found a stock that could deliver a whopping gain of more than 11,000%.

Check that out here.

Toyota (and Others) Go All In on This “Tesla Killer” Tech
There are only a handful of companies working on the next-generation tech that will be installed in this massive wave of new clean energy vehicles. Outsider Club editor Adam English explains how investors can get in on the ground floor...
Batteries Now Obsolete? The “Tesla Killer” Is Here
American-Made "Blue Gas" Has Elon Musk Furious!
Tesla Can’t Overcome These Hurdles
If you ask anyone what the future of cars looks like, they’re bound to point to Tesla. According to 78% of automotive executives, they're wrong. Outsider Club editor Adam English explains what the real future of cars looks like...
Investing in Marijuana Without Getting Burned
The marijuana industry has rewarded scores of investors with life-changing gains.