Publisher's Note: Mr. James Dines is a legend whose insight has been proven time and time again.

One of those insights was a very early bullish call on investing in uranium, making Mr. Dines "The Original Uranium Bug." Today we bring you an excerpt of The Dines Letter discussing it.

Implacable, adj. Not to be appeased without a large sum of money.

The Dines Letter dared to become “The Original Uranium Bug” when it was an even more deeply unpopular recommendation than it is these days, with a Major “Buy” signal on uranium at $8/lb (see chart below). In one of our historic calls, its price subsequently soared 1,650% to as high as $135, and many uranium stocks soared by far higher percentages, providing a slice of an opportunity to make a “killing.” 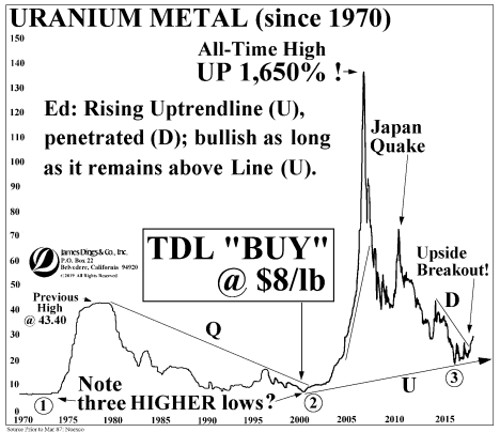 Atomic power is implacably hated because it leaves toxic waste after having been used, while solar and wind power do not. That is the truth. But solar and wind, with all their good growth ahead, cannot replace oil, natural gas, or coal worldwide in time. Our planet’s temperature is already rising.

Please recall our old, unlikely-looking prediction that the anti-nuclear power movement would actually boost atomic power as a dependable input of carbon-free energy. In fact, it’s already begun and will continue to spread.

There is an insolubly deep disagreement about whether global warming is a natural cycle that is of little concern, or a one-way path to melting ice caps and a flooded world. Both sides can at times be in the Low State of Hyperneeding to Be Right. The topic has become a political debate instead of a problem to be solved. Instead of politics, let’s stick to facts on which both sides could agree: we have an imperfect solution.

It is a fact that the planet is warming, and that we can’t dare to gamble with our only planet. It is also a fact that humanity has simply not coughed up the trillions of dollars needed to replace coal with solar, wind, geothermal, etc. Nor is it likely to do so in time to make a difference. President Trump prominently favors cheap coal, but honestly, we are sometimes uncertain if he really believes something, or is just negotiating. As it stands now, America would pay the bulk of the cost to address climate change, while China would give very little until 2030, and who knows if anything would actually change then. Trump is in heavy-duty negotiations with China on trade issues now and will get China to pay back more of its current share, after which we predict Trump will become “green.” Although we doubt anyone would believe that haruspication yet.

Solar and wind produce energy without creating pollution. It takes a lot of nerve to state this, but the truth is that atomic power is equally as clean as solar and wind! The objections to atomic are two. One, the atomic residue is lethal, although it could safely be stored five miles deep. And two, atomic power plants are dangerous. But so is alternating current, and it is the world’s primary power source. JP Morgan backed Edison’s direct current, while Westinghouse and Tesla instead preferred alternating current — the latter more dangerous, but cheaper and better over long distances. Alternating current won the contest, so it was made safer, to avoid accidental electrocutions. The same argument could therefore be made about the risks of atomic energy plants.

Atomic power could definitely be made much safer. Chernobyl’s problem was a flawed reactor design and a vodka-besotted staff. Fukushima’s plants were in earthquake and tsunami zones, at sea level, with a protective wall built lower than it should have been, to economize. Stinginess risks ultimately being more expensive, especially when irresponsible cost-cutting impacts safety.

Our prediction is still that the solution to global warming will be a mix of wind and solar, plus safe atomic power! The current alternative is worse.

Germany’s Merkel has halted all atomic energy production, but now the population is outraged at the higher costs of replacement energy. Also the French recently rioted in the streets over a higher gas tax to pay for the expenses of mitigating global warming. Ending atomic power is not going to work.

Worse, those who want to close down all atomic power really have not confronted the simple fact that it today provides a substantial percentage of the world’s power. For example, America gets 20% of its power from atomic-powered plants, many that are nearing the end of their projected lives. Unless an urgent decision is made to upgrade them, or build replacement atomic power plants, the lights will go out — necessitating returning to carbon.

Another stark fact is that atomic power plants, the primary buyers of uranium, have been postponing long-term contracts to buy uranium because uranium’s price has been dropping. Utility buyers are simply buying near-term uranium in the open market because it has become cheaper. But the above chart shows an Upside Breakout above (D). It’s a bit early to be sure, but it is a bullish beginning. With sudden demand, there could begin a stampede to buy uranium, and its price would rise to discount that. And, lo and behold, uranium’s price has in fact begun to rise, up a remarkable and unnoticed 47% since March 2018.

Furthermore, defying Europe and America disliking atomic power, there is a stampede to build atomic power plants outside America. China, for example, is racing to build more for itself, but also for other countries desiring energy independence. Thus, a new atomic power industry is emerging: building plants for other countries, gaining potential long-term control of the industry. America invented atomic power but its expertise has slipped away to Russia and China. America thought itself too rich to handle dirty uranium, and is now losing the opportunity to be the atomic power industry leader. America will eventually rue the day it did not control ample reserves of its uranium metal, for future centuries. Indeed, it is not widely realized that America sold 20% of its domestic in-situ recovery production capacity to Russia, in 2010, when Rosatom purchased Uranium One, but that’s another story, for another day.

One major challenge to solving this worldwide problem is that developing countries have no nuclear alternative available, yet possess plenty of coal. How could that be solved soon enough? It can’t, and they will use their coal.

The bottom line, the compromise for long-term and patient investors, atomic power generates power with zero pollution, to dilute the unsustainable use of coal. The way it is, is the way it is. Uranium will be a wise long-term investment, and we have been waiting patiently for the next major upwave of uranium prices. We are bullish on uranium again.