A Day of Reckoning for Washington Insiders

Having knowledge others lack is a very, very good investment strategy.

“Having knowledge others lack is a very, very good investment strategy.” — Insider

Big waves are forming in Washington.

There’s renewed pressure from the public and politicians on both sides of the aisle to place restrictions on lawmakers’ ability to trade individual stock.

A recent poll by the Convention of States Action found that 76% of voters believe lawmakers and their spouses have an unfair advantage in the stock market.

This comes at a time when various members of Congress made opportunistic stock trades right before COVID-19 was publicly declared a pandemic in the U.S.

If you don’t already know what happened, here’s the rundown...

I still remember the confusing rhetoric coming out of Washington at the beginning of 2020. At the time, my team and I were figuring out the best way to report on the coronavirus. Was it a pandemic or just an epidemic? Was it even safe to be in the office? We were all left in the dark.

On Jan. 24, the Senate Committees on Health and Foreign Relations held a closed-door meeting with senators about the virus and the coming physical and economic impact it was going to have on the U.S.

The public, however, wouldn’t know this information until March 11, when the World Health Organization (WHO) officially declared COVID-19 a global pandemic.

As for our leaders in Washington? They knew what was coming all along and made sure to rebalance their portfolios to profit from the coming catastrophe and stock market correction.

Not wasting a minute, Senator Kelly Loeffler, who’s married to Chairman of the New York Stock Exchange Jeffrey Sprecher, sold millions of dollars’ worth of stock. On the same day as the coronavirus briefing, Senator David Perdue sold more than $1 million of his holdings and bought DuPont, a leading manufacturer of personal protective equipment.

Most blatant were Senator Richard Burr’s transactions. As chair of the Senate Intelligence Committee, he had access to information only a small handful of people had. According to NPR, he attended a luncheon at the Capitol Hill Club on Feb. 27, where he delivered this message:

There’s one thing I can tell you about this: It is much more aggressive in its transmission than anything we have seen in recent history. It is probably more akin to the 1918 pandemic. Every company should be cognizant of that fact that you may have to alter your travel. You may have to look at your employees and judge whether the trip they’re making to Europe is essential or whether it can be done on video conference. There will be, I’m sure, times that communities... have a transmission rate where they say, “Let’s close schools for two weeks. Everybody stay home.”

Sure would have been helpful for the U.S. public to have that information. As for Burr, he and his wife sold more than $1 million worth of stock before the WHO’s global pandemic declaration.

Federal Reserve Vice Chair Richard Clarida sold a stock fund in February 2020 and then bought back into it right before the Fed announced safety-net programs to curb the economic fallout from the pandemic. After his trades surfaced last month, he stepped down, just weeks before he was set to retire at the end of January.

Of course the ensuing Justice Department investigations didn’t do squat, and no one was held criminally accountable.

So there’s clearly a double standard for lawmakers when they get in trouble. And this has caused an outcry not only from the American public but from other members of Congress.

The Call’s Coming From Inside the House

Now, Alexandria Ocasio-Cortez can be pretty polarizing, which is why her recent stance against congressional insider trading makes the issue even more cogent and brings it to the forefront of people's minds.

In an interview with Yahoo Finance, she said at least 75 members of Congress held Johnson & Johnson, Pfizer, and Moderna stock the last two years, and continued...

Amen. This is popular opinion, and I think we can all get behind that. Other members of Congress don’t see it that way though.

Speaker of the House Nancy Pelosi has been outspoken against any new bill that bans congressional trading, telling reporters that “We’re in a free market economy. [Lawmakers] should be able to participate in that.”

And boy, have they been participating. Just look at the millions of dollars they spent on stock trades last year... 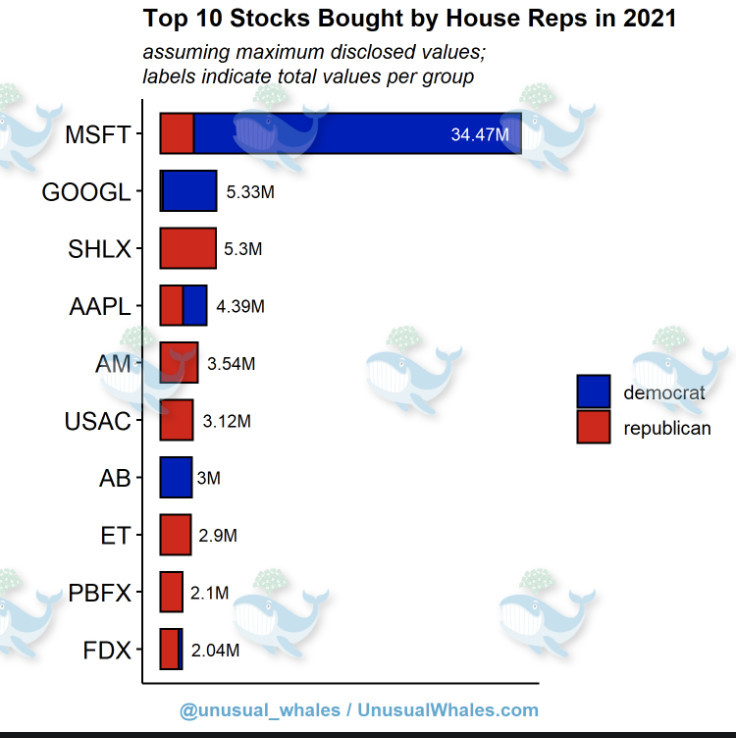 After feeling the pressure, Nancy Pelosi has since come around, saying “I just don’t buy into it, but if members want to do that, I’m OK with that.” She doesn’t care at this point anyway; she’s already made her millions.

But other Democrats think that's unfair and want their shot at profiting on the backs of the American people. Rep. Elaine Luria of Virginia sat down with Punchbowl News to deliver her opinion on the whole affair:

I think this whole concept is bullshit. Because I think that, why would you assume that members of Congress are going to be inherently bad or corrupt? We already have the STOCK Act that requires people to report stock trades. Why would you... automatically assume that they’re going to use their position for some nefarious means or to benefit themselves? So I’m very strongly opposed to any legislation like that.

That statement doesn't even dignify a response.

Luckily Reps. Abigail Spanberger and Chip Roy are working on their own bill to ban congressional trading, which will finally make it absolutely clear that lawmakers don’t have any ulterior motive when making decisions.

Trading on the Inside

For now, we’ll keep tracking congressional trading for our own benefit. Because if you know where to look, you can use these insider trades to your advantage. Fortunately, the internet has made congressional and corporate trades readily accessible. The only problem is sifting through the boring forms and cross-referencing them to find tradable patterns. But as Benjamin Franklin said, “An investment in knowledge always pays the best interest.”

That’s why in the coming months, I’ll be bringing you an exclusive opportunity to follow me as I comb through the thousands of insider trades posted every day from corporate insiders, large financial institutions, and politicians. I’ve found this strategy to be extremely profitable while giving me the confidence and peace of mind needed when pulling the trigger in such a volatile market.

In the meantime, our senior tech analyst Keith Kohl is going all-in this year on biotech, a sector rife with opportunities from this COVID mess. But it’s nearly impossible for the average investor to know what’s going on behind the scenes at these drug companies. That’s why Keith’s partnered with top doctors and scientists in the industry who focus on the approval of all the niche drugs being tested right now. Keith has been known to tell his readers with pinpoint accuracy when the next biotech stock will take off.

These trades often happen fast. He’s already banked his readers gains of 3,278% on Aquinox in one day and 668% on Amarin in less than a month!

And he just released a new play that could go even higher.

Just go here to get the inside scoop on the next big biotech stock.