Written by Jason Simpkins
Posted May 6, 2022

Let me be clear about something...

What we are currently witnessing is the greatest military buildup — the largest global arms race in the history of the world.

Globally, total military spending reached more than $2 trillion for the first time in 2021, according to an April report from the Stockholm International Peace Research Institute.

The top five largest spenders will not surprise you.

They are as follows:

Together these five countries, in a world comprised of 195 nations, accounted for 62% of total arms expenditure.

That's 2% (and really more like 1.5% if you narrow it down to just the top three) of the world's nations that account for almost two-thirds of global defense spending. 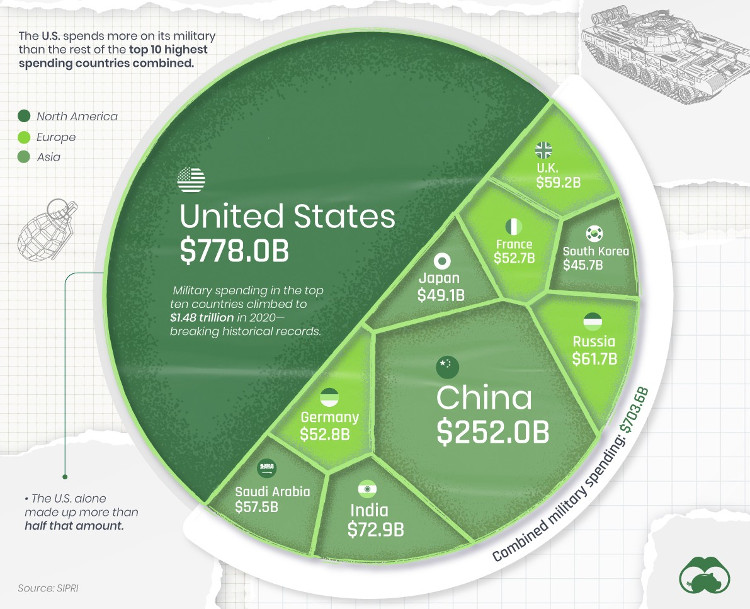 A lot of that has to do with wealth disparity, of course. The U.S. and China, the world's two richest nations, simply have the money to spend, whereas smaller, poorer countries can't afford that kind of largesse.

But that's not all there is to it. There's also the matter of political will.

That's why Russia has the world's fourth-highest defense budget despite ranking 11th in GDP. Similarly, Saudi Arabia is the world's 20th ranked economy, but 6th in military spending.

This is because many European nations outside of Russia have long taken their security for granted.

Of course, now, Russia's invasion of Ukraine has changed that calculus.

Russia's decision to flout international doctrine, its attempt to unilaterally redraw the world's borders, and its unflinching drive to impose its will on a sovereign neighbor has woken the world up to the the fact that long-held standard assumptions are little more than a mirage without the military might to enforce them.

Indeed, sanctions and a coordinated assault on Russia's economy have done nothing to change its course. Just like they failed to subdue North Korea and Iran.

At this point, it's only clear that sanctions and diplomacy have their limits.

That's why many of the European countries, who for years favored the expansion of social welfare programs over defense spending, must now adjust.

It's why the U.K. recently pledged to increase defense spending by $22 billion over the next four years.

And it's why Japan rescinded its pacifist pledge and approved the biggest defense budget increase in decades — a 6.5% increase totaling $51.5 billion.

Still, as always, it will be the United States that continues to drive defense spending.

Last month, President Biden signed off on a $782 billion budget for the Pentagon, an increase of $29 billion.

And that doesn't even include assistance to Ukraine. To that end, Biden recently requested another $33 billion in aid. That's half of Russia's total military budget.

This isn't an anomaly. It's the beginning of a long-term trend.

It is the result of boundary pushing by Russia, China, and others that would continue to test the ability and the resolve of the West to enforce the order it has spent decades building.

To be clear, our path forward will not be an easy one.

It will be chaotic, trying, and at times scary.

But that's how things are, and we're better off acknowledging that fact than pretending our enemies are too weak or too complacent to seriously challenge the world order.

Russia has failed to achieve a quick and satisfying conclusion to its war, but that doesn't mean Vladimir Putin or his eventual successor will simply give up. And it will only inspire China to aim even higher as it sets its sights on Taiwan and the South China Sea.

It's something I've been saying for years, only to be dismissed.

Of course, now more and more people are coming around.

And investors should too.

We have to recognize this as a massive profit opportunity — a chance to dip into these giant streams of government funding and come out with companies and stocks that will deliver triple-digit returns.

That's why I recently launched a brand-new service...

I'm also filming monthly webisodes in which I talk about those findings. I've already filmed and produced two with a third on its way.

Check it out if you haven't already.