The most loyal readers of this website know that I once ran a trading service focused exclusively on defense contractors.

My current service, Wall Street's Proving Ground, has carried on that legacy with a portfolio that includes key defense partners like Lockheed Martin (NYSE: LMT). However, I've also branched out into cryptos, high-flying space plays, and even cannabis.

Nevertheless, the defense industry, military technology, and geopolitical intrigue remain close to my heart. And the evolving situation with Russia and Ukraine has drawn me back in.

You yourself might be wondering: "Is this really happening and should I be buying defense stocks?"

The answer to both those questions is "Yes."

Take it from me, the guy who's been telling investors to buy defense stocks for seven years now.

If you'd taken my advice back then, you'd be sitting on some decent gains...

But that's not really the point. The past is prologue.

What I'm trying to tell you today is that those companies are going to keep going up for the exact same reasons I outlined in 2015.

First and foremost, defense spending is one of the few (maybe only) areas where Democrats and Republicans are in agreement. They both believe we have to spend big.

Donald Trump increased defense spending by more than $100 billion over the level he inherited from the Obama administration, taking it to a total of $738 billion.

And what's Joe Biden done in his first year as president?

The only time America had a bigger defense budget (adjusted for inflation) was in 2011, when we had our peak amount of troops in Iraq and Afghanistan.

It's also more spending than the next 11 countries combined... 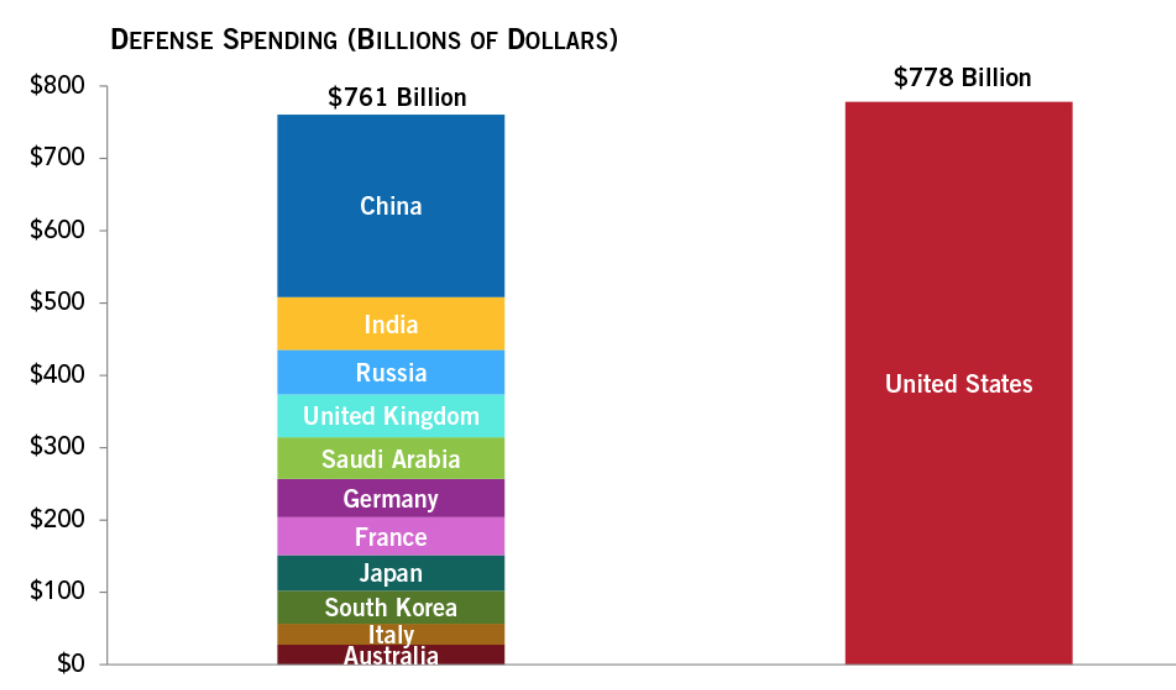 (*There is one slight caveat in that China almost certainly spends more on its military than it officially acknowledges, but I think you get the point.)

It's a massive amount of spending. And again, it's going to keep growing.

Think about it: Even a withdrawal from Afghanistan didn't put a dent in spending. It still went up. Because again, defense spending is a bipartisan issue. And there's a reason for that.

Americans generally agree that we ought to be well-guarded. Money and equipment for troops is politically popular. In fact, A 2020 poll by Gallup showed a record-high percentage of Americans (fully 50%) believed defense spending (which was at its highest point pretty much ever at the time) was "just right."

That's certainly because many people feel threatened by Russia's aggression, China's rise, and global terrorism. But it's also because the defense industry employs 2.2 million people. More, even, when you add in all the government workers and civilian employees that are tasked with contracting, analysis, and maintenance. It also accounts for more than 10% of our country's manufacturing demand.

It's not just a populist issue, either. You also have to factor in the sway of the military industrial complex.

U.S. generals will always want more money for their forces, and U.S. presidents, pretty much without exception, will always be inclined to give it to them. And Congress is filled with politicians that list defense contractors among their biggest donors.

And on top of that, now we've got rising aggression from great power rivals, Russia and China.

Russia seems determined to finish what it started in Ukraine years ago, and defense officials from the United States to Europe are scrambling to coordinate a potential response.

Sanctions and NATO expansion will be on the table politically, but increased defense spending is already a given.

In fact, Russia's invasion of Crimea and Donald Trump's brow-beating had already spurred many countries in Europe to ramp up their own defense initiatives.

NATO’s European members already spend three to four times what Russia does on defense annually. But that hasn't stopped the bloc from ramping up.

The U.K. recently pledged to increase defense spending by $22 billion over the next four years.

Furthermore, 2021 marked the seventh consecutive year of defense spending increases for non-U.S. NATO members, as Finland and Sweden set their sights on Russia.

Finland boosted its budget by 2.2% last year and Sweden is targeting a massive 40% increase from 2021 to 2025 (the Scandinavian nation’s largest defense-spending increase in 70 years).

All of this, and we haven't even gotten to China — another serious threat to global stability.

China absorbed Hong Kong with almost no pushback from the West. It also laid an aggressive claim to the entirety of the South China Sea (effectively seizing sovereign territory from its neighbors Vietnam, Malaysia, Indonesia, and the Philippines) and backed up that claim by militarizing a large chain of small artificial islands known as the Spratlys.

American vessels and planes have been confronted by Chinese forces on several occasions when conducting operations in the region.

China and Russia have also advanced their cutting-edge hypersonic and space weapons.

In fact, General Mark Milley, the chairman of the Joint Chiefs of Staff, recently raised alarm over a series of hypersonic weapons tests conducted by China last year, calling it a “Sputnik moment.”

Unsurprisingly, hypersonics and space (the Space Force) are major areas of increased focus for the Department of Defense.

And it's going to get worse.

So everything I've been saying about defense contractors for the past seven years is true and getting truer every day.

And check out my latest space play here — a company that's already evolving into a key Space Force partner.