“Better to Win An Arms Race Than Lose A War”

By the end of the Cold War, the United States and Russia had agreed to wind down their nuclear armaments.

After all, no good could come from both sides having the capacity to blow up the world 10 times over.

And for roughly 20 years, that logic held as nuclear arsenals were wound down.

Today, unfortunately, we’re heading in the opposite direction. The pendulum has swung back to an era of massive military build-ups, bombastic threats, and a shaky, perhaps even unsustainable peace. 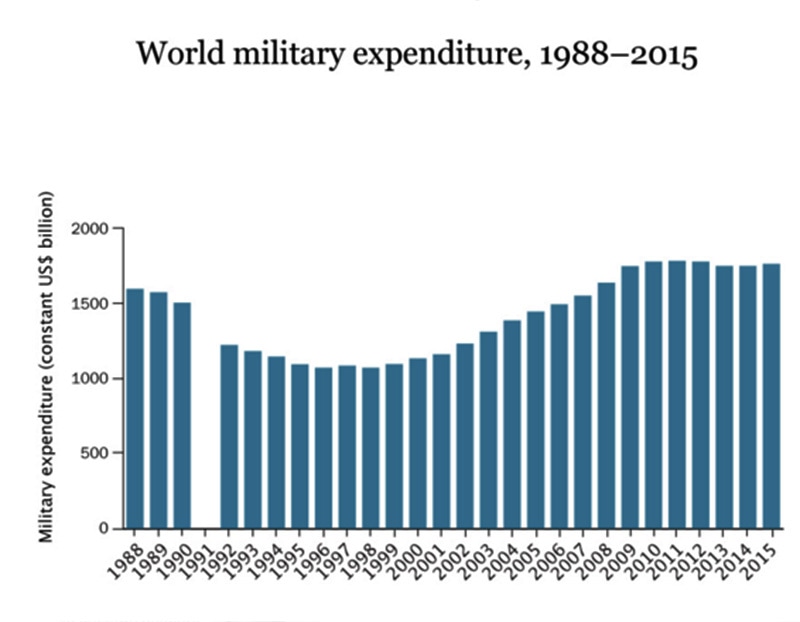 As you can see, it was going way down at the end of the Cold War. But it’s gradually crept back up since 1998.

And it’s going to keep creeping.

The United States, Russia, China, and quietly Saudi Arabia (which actually ranks third, ahead of Russia in terms of military spending) are in an arms race.

It’s not a secret. It’s something our political leaders are willing to acknowledge and even celebrate.

"It's better to win an arms race than lose a war," Sen. Tom Cotton, R-Ark., told the Center for the National Interest just this Monday.

This statement is a major deviation from what we’ve been hearing out of Washington for the past three decades. It’s aggressive (perhaps to the point of being foolhardy), inflammatory, and it echoes exactly what Donald Trump has been saying for more than a year now.

This is something I touched on last week, but it bears repeating.

Donald Trump is expanding U.S. nuclear capability in a way none of his immediate predecessors ever imagined.

“Let it be an arms race! We will outmatch them at every pass and outlast them all,” Trump said back in December.

Nuclear weapons are a big part of that.

Indeed, the threat of a nuclear war is very real.

Analysts often point to “rogue nations” North Korea and Iran as the likely culprits for future nuclear attacks. And they may well be.

But you can’t ignore Russia.

With at least 7,300 extremely advanced nuclear weapons, Russia has the largest nuclear stockpile of any nation in the world. The U.S. comes in second, with about 7,000.

Trump was being prepped to take office at that point, meeting with government officials to get crucial and classified information — the kind of stuff only top military brass and the president know.

And according to former Marine intelligence officer Scott Ritter, he would have learned that America’s nuclear weapons program has fallen behind Russia’s.

Ritter, who served on the staff of General Norman Schwarzkopf during the Gulf War and as a U.N. weapons inspector in Iraq from 1991 to 1998, says Russia recently developed a nuclear warhead capable of breaching U.S. missile defense.

Known as “Object 4202,” Russia’s hypersonic warhead goes 15 times faster than the speed of sound, is capable of evading any anti-missile system the U.S. has, and carries multiple warheads that can split into 15 individual bombs. Each would destroy an area the size of Texas and the bomb could arrive from a silo in Russia within 12 minutes.

That’s what we’re up against, and frankly, we’re not prepared for it.

Russia has also deployed intermediate-range nuclear weapons that could attack Europe. This violates the 1987 Intermediate-Range Nuclear Forces Treaty, in which Moscow and Washington agreed to eliminate all their land-based nuclear missiles that could hit targets within 3,400 miles.

See, the difference between long- and intermediate-range missiles is that intermediate missiles can hit their target before it can retaliate. If Russia launches a nuke at the United States, we’d still have enough time to deploy our weapons in retaliation. That’s not true of Europe.

What are the odds that Russia would do that?

Higher than you probably think.

Vyacheslav Alekseyevich Nikonov, a member of Russia's lower house of parliament and a political scientist involved with Russian politics since the 1970s, recently argued Russia would need to utilize some form of nuclear warfare to deter U.S. or NATO forces from invading, should they decide to enter Crimea or eastern Ukraine.

"On the issue of NATO expansion on our borders, at some point I heard from the Russian military — and I think they are right — if U.S. forces, NATO forces, are, were, in the Crimea, in eastern Ukraine, Russia is undefendable militarily in case of conflict without using nuclear weapons in the early stage of the conflict," Nikonov said.

Nikonov cited 400 points of NATO military installations near its borders, some armed with nuclear weapons, and said the West was "not just a force for good."

Other Russian threats have been more pointed and less rational.

"Russia is the only country in the world that is realistically capable of turning the United States into radioactive ash," Dmitry Kiselyov (Russia’s Bill O’Reilly) said on his weekly current affairs show. Behind him was a backdrop of a mushroom cloud following a nuclear blast.

In December, Vladimir Putin named Kiselyov as the head of a new state news agency. That’s the kind of message he wants to get out — nuclear annihilation is on the table if NATO sets foot in Ukraine.

“We need to strengthen the military potential of [Russia’s] strategic nuclear forces,” Putin said. “Especially with missile complexes that can reliably penetrate any existing and prospective missile defense systems.”

And that brings us back to Tom Cotton, who joined Trump in stoking the arms race earlier this week.

"If our adversaries are contemplating the use of nuclear forces as part of normal warfare, then I would suggest we'd be best advised to develop ballistic missile defenses instead of clinging to a deterrence framework that they have already discarded," Cotton said, referring to Russia’s treaty violation.

In Game of Thrones, they often speak of the Long Summer, and how it’s coming to an end. That’s true in the real world, as well.

It could be nuclear or just another Cold War.

But the long summer of disarmament is over.